As you may have seen and read, British Airways are currently running a sale with a variety of good offers to destinations all over the world – although of particular interest to us here at Visit Croatia are the deals they have on their flights and holidays to Dubrovnik!

They are offering flights to this wonderful Dalmatian destination in January, February and March from only £49 one-way or £98 return. That’s a great price, especially when you consider that all taxes are included plus, of course, a whole host of services not found on certain other (i.e. low-cost) airlines! (Think generous free baggage allowances, in-flight meals and so on.)

As mentioned, all the above deals are only available for holidays or flights booked during January to March (exact dates are 6th January to 31st March), although there are still good deals available on flights for the following months too.

I’ve found return flights to Dubrovnik during July and August being offered from £145 (once again, including taxes) which is a great deal for the height of summer. If you’re interesting in flying to Dubrovnik in June, there’s flights from a slightly more expensive £158 return, which again is not a bad price at all.

British Airways has a helpful cheapest fares to Dubrovnik in economy grid which is an easy way of seeing how much flights cost during the different months.

The sale ends 25th January 2011, so you do have some time left to book – though the best deals are sure to go soon, so act quickly! 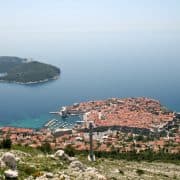