You are here: Home / Croatia Destinations / National Parks in Croatia 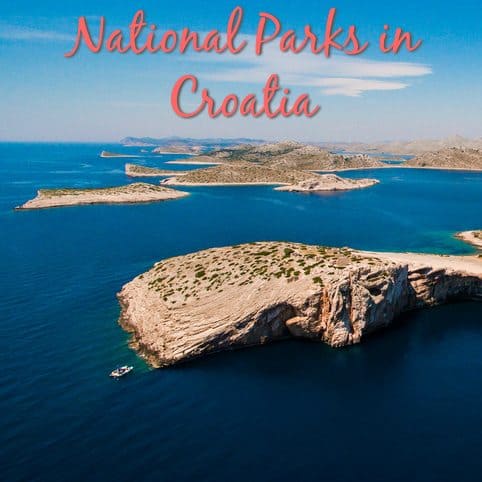 The Brijuni islands are a small collection of islands just off the coast of Istria. In fact, they’re pretty much the only islands (that can be visited by public transport) in Istria! Formerly the summer residence to President Tito, the leader of Yugoslavia, the islands were awarded national park status in 1983. The main island is Veliki Brijun to which the ferries go. There is a safari park on the island, and there are the remains of Roman villas. A tourist ‘train’ makes it easy to travel around the island. 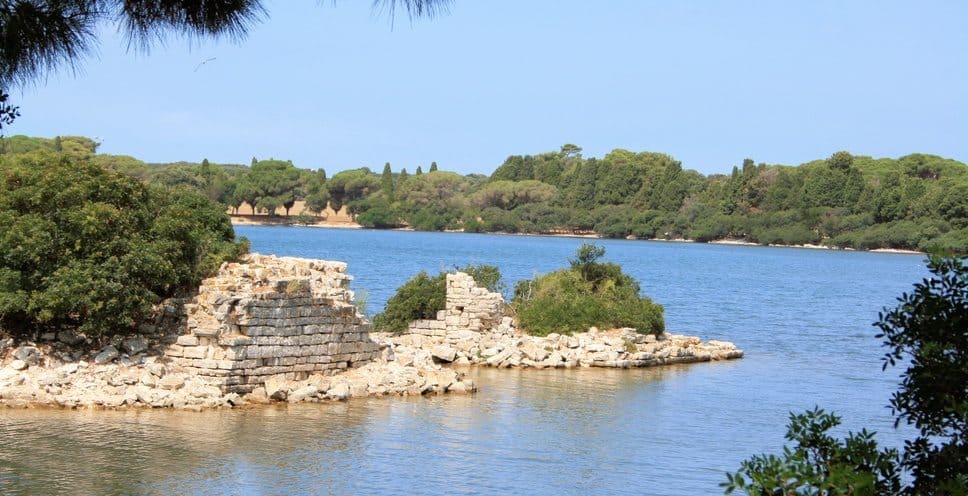 Veliki Brijun has its own hotel and is also home to the Ulysses Theatre, a open-air theatre that holds performances in summer.

Easy to reach from: Most locations in Istria (Porec, Rovinj, Pula) – ferries run from Fazana in Istria

Difficult to reach from: anywhere else in Croatia!

See our Guide to the Brijuni Islands

Risnjak is another (see below) of the national parks in Croatia which is suitable for the more active – there’s plenty of opportunity of hiking and walking on the trails in quiet, natural surroundings. The Park’s highest point is Risnjak peak, at 1,528 m high, to which you can trek for some jaw-dropping views. 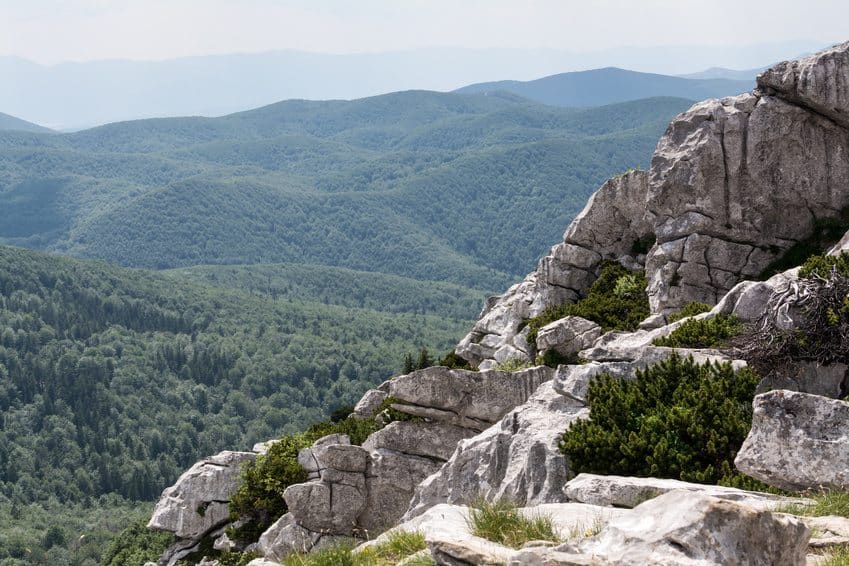 It’s home to bears, wolves and lynx (the Croatian for which – ris – Risnjak draws its name) although you’re probably unlikely to see any of these animals during your visit. However, the gorgeous natural surroundings more than make up for that. The park is also beautiful whatever the season – whether it’s lush greenery in spring and summer, colourful hues in autumn or snow in winter. Do be aware thta Gorski-Kotar often gets heavy snowfall in winter, so check before you set off that the park is accessible.

There’s a guesthouse in which you can stay, year-round, which also houses a restaurant. There’s also a mountain hut with 43 beds, close to Risnjak peak, which is open from May to October (but not on Tuesdays!).

Risnjak is best visited if you have your own car, as it’s more difficult to get to by public transport.

Easy to reach from: Rijeka/Kvarner region

Possible to reach from: Istria, Zagreb

What some consider to be THE National Park in Croatia, the Plitvice Lakes are a truly spectacular sight. Sixteen inter-connecting lakes, numerous stunning waterfalls, gorgeous nature and interesting wildlife make the park an amazing place to visit, and you can easily spend hours (even spread over several days) walking through the park’s trails. 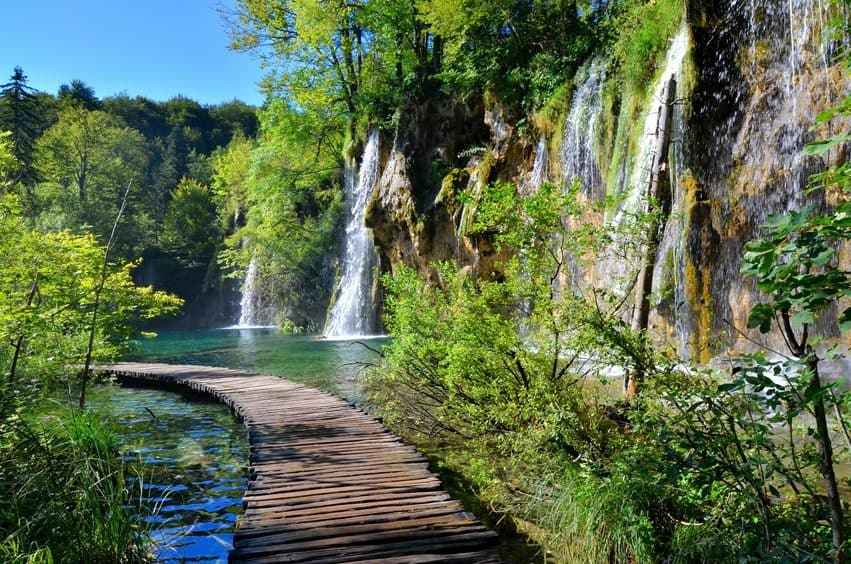 The Lakes were given National Park status as far back as 1949, and were also given UNESCO World Heritage status in 1979.

Easy to reach from: Zagreb or Zadar – there are direct buses from either that take about 2 and a bit hours.

Possible to reach from: Split – there are also direct buses from Split, although these take longer

Difficult to reach from: Dubrovnik (it’s too far away!) or Istria or Kvarner regions (there are no direct connections). From Istria/Kvarner, we would absolutely recommend taking an excursion with a local agency. From Dubrovnik, there are some excursions available…but it’s a rather long 15-hour day!

See our Guide to the Plitivce Lakes

One of the more recent areas to be bestowed National Park status – in 1999 – this park of course the northern section of the Velebit mountain range. (Paklenica, below, is situated on the southern section.) It is very suitable for hikers and trekkers, and there’s a number of trails through the park, many offering fantastic views from the park’s peaks out over the Croatian islands. There’s also a botanical garden which features the plant life that exists in this national park. 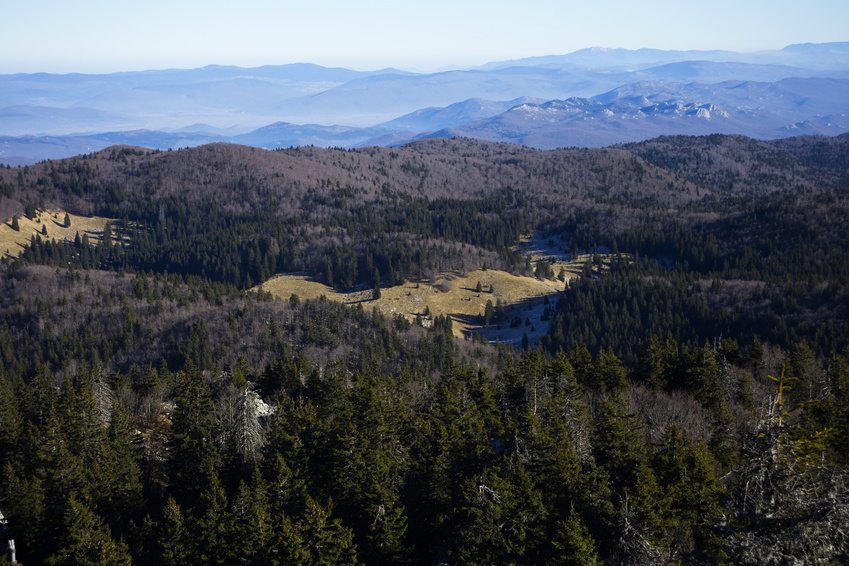 It is highly recommended to take a look at the park’s official website (see below) which has detailed information on the different trails you can hike on, and how long each is expected to take.

There are a few basic mountain huts for staying the night in the park, but it may be more suitable to stay in one of the nearby villages – Krasno or Otocac in particular.

Easy to reach from: you do need your own car to visit North Velebit National Park – it’s best to head to the entrance near Krasno as a starting point. This village is about a couple of hours drive from Zadar, Rijeka and Zagreb.

For the more adventurous amongst you, Paklenica is probably the top choice amongst the National Parks in Croatia. It’s a top spot for hikers, climbers and even cyclists although there are more gentle trails in the park too. Covering an area of 100km square, close to the Velebit mountain range, the impressive peaks, canyons, forests, plant and animal life offer up a different kind of experience. There’s also the Manita pec cave which contain various cave formations and underground fauna. 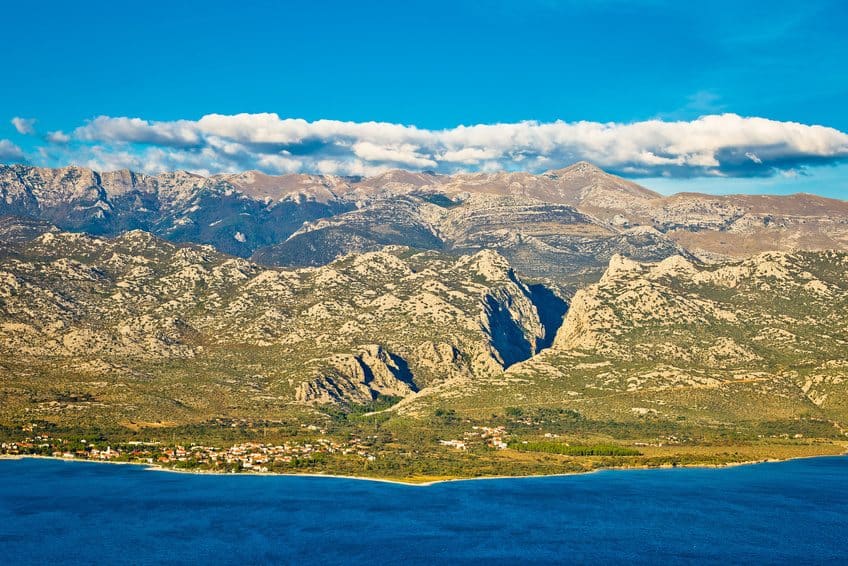 Easy to reach from: Zadar – there are buses to Starigrad Paklenica, which is near the entrance to the National Park. Some buses from Rijeka heading south also stop in Starigrad Paklenica. However, it is undoubtedly easier to reach this park if you have your own car.

A stunning ‘island’ national park, 89 islands, islets and reefs make up this National Park. You only have to look at some of the stunning imagery of this place to know how stunning it is to visit. It’s a prime spot for swimming, or snorkelling or diving as well as enjoying the gorgeous surroundings and tranquil nature of the islands. 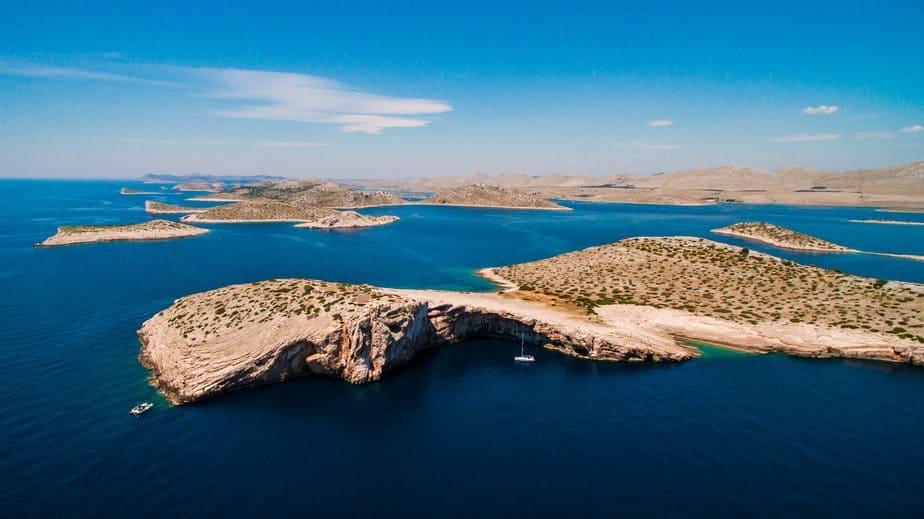 This national park can only be visited by organised tours (unless you have your own boat!) and there are strict rules about which areas can be visited. (There are certain areas of ‘strict protection’ in which visitors are not allowed.)

You can even stay on one of the Kornati islands for the ultimate in a peaceful vacation.

Difficult to reach from: elsewhere in Croatia – unless you have your own boat and can sail to here!

Another stunning park with numerous waterfalls, the location of Krka National Park (close to the Dalmatian coast) makes this a popular place to visit. If we had to say it, it’s not quite as spectacular as the Plitvice Lakes, but does come a very, very close second. 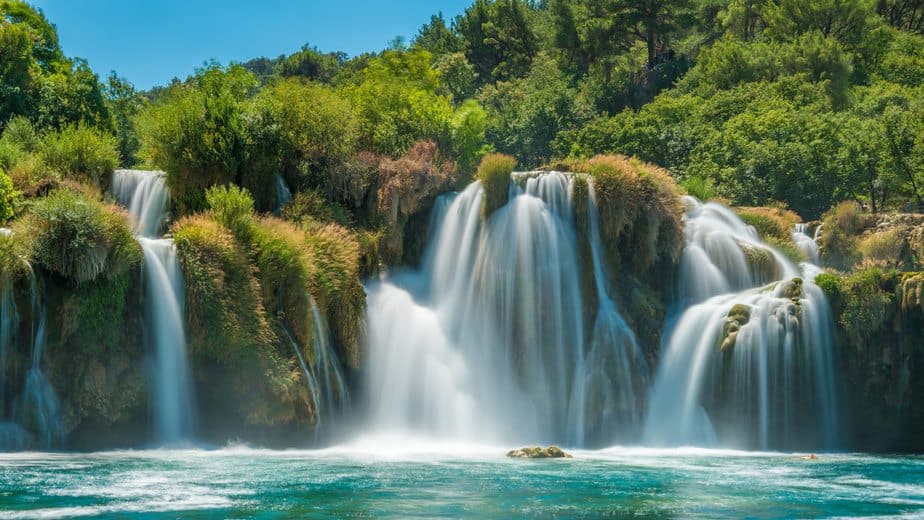 What Krka does have, however, is the ability for swimming! The wonderful Skradinski Buk falls are an amazing backdrop for a splash about in the greeny-blue waters, particularly after a hard-earned walk on the winding paths in the park.

The island of Visovac (on which there is a monastery from the 18th century) is another attraction in the park. Taking one of the excursion boats is a great way of making your way through Krka National Park.

Easy to reach from: Sibenik, Split, Trogir, Zadar – Krka is very suitable as a day trip from all these places

Possible to reach from: Plitvice – there are some (not many) direct bus services between these two national parks, so you can visit one directly after the other; Dubrovnik – it’s a bit of a trek to get to Split or Sibenik and then to transfer to the Park

Difficult to reach from: Istria 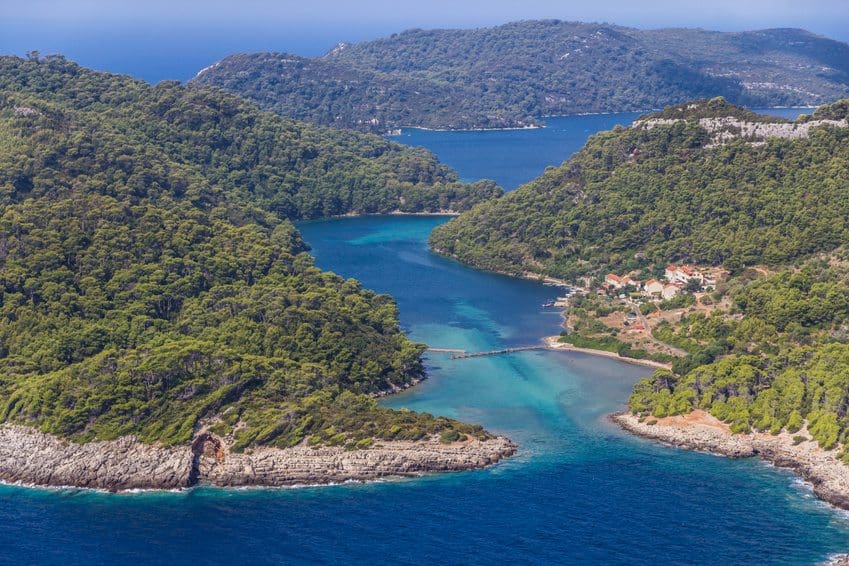 The Park is best known for its two saltwater lakes, Malo and Veliko Jezero (small and big lake), which are connected by a canal. Due to the nature of the lakes, the water temperature is far colder than the sea in winter, and far warmer (perhaps even mid to high 20s Celsius) in summer. Veliko Jezero is home to Melita island which has a Benedictine Monastery on it.

As well as walking through the park, a great experience is also to hire bikes in one of the main towns and cycle through.

To those wishing to reach the National Park direct, make sure you take a catamaran to Polace or Pomena, both of which are in the National Park. Sobra (which is also where the car ferries go to ) is further east on the island, so you’d need to transfer from there to the park.

Easy to reach from: Dubrovnik – there are several daily catamarans (year-round, no less) and Korcula

Possible to reach from: Split, Brac, Hvar by catamaran in summer; these are best utilised for a proper stay on Mljet rather than just a day trip

Difficult to reach from: further north on the Croatian coastline

There is an official Parks of Croatia website where you can find plenty of further information. Tickets can also be purchased online for Krka and Paklenica National Parks. Tickets for the other parks should be available in the future.