Some exciting news about another new catamaran route in Croatia for 2017 – one that we’re sure will benefit many visitors to the country.

This new catamaran route will hop between the mainland and some of Croatia’s most popular islands, connecting Split, Bol on the island of Brac, Makarska, Korcula, Mljet and Dubrovnik.

The service is being run by Kapetan Luka, who already also run a popular route connecting Split with Milna on Brac, Hvar Town on Hvar, Korcula, Mljet and Dubrovnik.

This new service will commence sailing on Monday 12th June 2017, running daily until Sunday 17th September 2017. The timetable of the new service is as below:

This new route brings up some exciting new sea connections. In particular, Makarska is now connected by sea to the prime spots of Bol, Korcula, Mljet and Dubrovnik. And to Split as well, of course, although as it’s only an hour or so down the road, it’s already easily reachable from Croatia’s second city! (Makarska does already have a car ferry to Sumartin on the eastern side of the island of Brac.)

This catamaran also sets up some opportunities for day trips not previously possible by public ferry. A day trip from Split to Bol is now possible; you’ll certainly get a full day in Bol, and be able to experience the delights of Zlatni Rat, one of Croatia’s most famous beaches. And from Makarska, you can also consider a day trip to Korcula or Mljet. (Dubrovnik is a little too far, and you’d only get four hours there!).

Tickets can be booked on Kapetan Luka’s booking website. We’d certainly recommend pre-booking tickets in advance, as we’re sure this route will be popular.

As a catamaran, this is obviously a foot-passenger only boat. No cars can sail on this route!

Other catamaran and ferry routes

Of course, there already are plenty of other routes running off the Croatian coast. Two other popular services – both of which have also started running in recent years – connect Split and Dubrovnik and stop at Brac (Milna or Bol), Hvar, Korcula and Mljet along the way.

For more details about these routes, and for other sailings, see our Ferries in Croatia section. 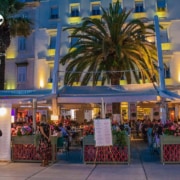