Tag Archive for: Articles on Croatia

You are here: Home1 / Articles on Croatia

This weekend, events took a sudden turn for the…not so good. A piece about foodie clubs (it’s what the cool young kids are doing these days – yeah, I dunno either), featured an inset box that listed a food-based “You Know You’re  A Grown-Up When You…”: 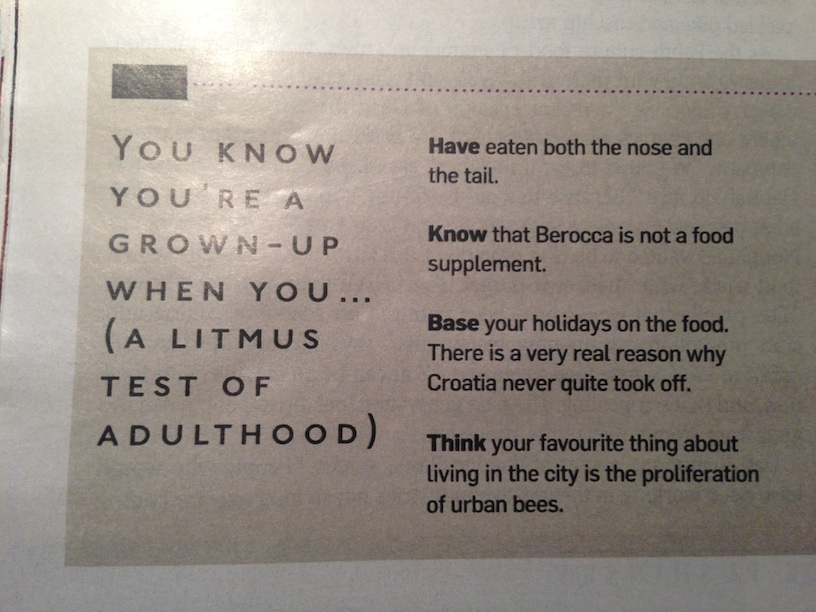 Heyyyy Sunday Times Style Magazine, what gives?!? What’s with the snarky tone? Let’s face it – you can barely move these days for newspaper and TV coverage proclaiming the wonders of Croatian food, from truffles to oysters to wine to stews to the super-strength fruit and herbal liquers to pastries and cakes, with there even being love for the pizzas and ice cream you find in the country. (Don’t laugh til you’ve tried either – preferably both! Though not at the same time.)

However, on a more serious note – “Croatia never quite took off”? Ow. BURN, as some might say. Someone was clearly having a bad day, seeing as they just got this so very wrong. I think they might need to liaise with their colleagues from the Travel pages where – again – not a weekend goes by without some kind of mention of holidays in Croatia. (Only a few weeks ago, Croatia had three entries in the Travel section’s “25 Top Holidays for 2013” in the Eastern Med, offering up advice for visiting the island of Lopud, a cycling holiday in Istria, and culture in Zagreb.

I look forward to reading more about Festivals in Croatia in an upcoming issue.

We at Visit Croatia actively follow all mentions of the country (on all subjects, but from a travel perspective most of all!) in the papers and see the full spectrum of different types of articles, from well-researched to poor, detailed to the hole-filled, incredibly useful to the downright patronising! We try and put together all travel articles (and even a simple mention here or there – if it’s worth it) on Croatia in our What The Others Say section. (We’ve got links to articles going right back to 1998 – take a look at how things have changed over the years!)

Having recently updated our 2011 Articles page, we took a look at the 2010 page and reminisced about some of the wonderful articles published on Croatia.

Here are our favourite pieces (these aren’t ranked in order of how much we like them, but purely on when they were published, oldest to newest!):

– First up, a nice piece on Zagreb titled On the edge of elegance from the Sydney Morning Herald. Arriving by train from Split, author Nicola Walker enjoys the very grand (though yes, it is pricey) Regent Esplanade hotel, once used by travellers from the Orient Express.

– Natalie Paris enjoys Summer Festival-hopping in the Daily Telegraph – thought not festivals of the more modern, dance kind! Instead she uncovers some more traditional and well-established ones, such as medieval games on Rab and the film festival in Motovun.

– Not really a travel article, it was still enjoyable to read how Trogir was used as a filming location – in place of 16th-century Venice – for an episode of Doctor Who, again in the Daily Telegraph: Why Doctor Who is vamping it up in Croatia. [Edit: Link no longer works, unfortunately.] Trogir also stood in for 19th-century France in another episode in the series!

– The Financial Times explored the delights of the tranquil islands near Zadar on a sailing holiday: The deserted bays of Kornati islands.

– Radio station BBC 6 Music – via the BBC News website – had a really enjoyable piece on the INmusic Festival that takes place every June in Zagreb. Last year’s event saw acts like The Flaming Lips and Massive Attack perform; the BBC spoke to them, whilst also taking a general look at the Festival: A Massive Attack of music in Croatia.

– Travel expert Simon Calder recounts a trip to the “secret” island of Solta, near Split, in the Independent: Slavic secret: Solta is steeped in history and rich in beauty. Whilst it’s perhaps not quite as overlooked as he writes, it certainly isn’t an island at the top of people’s lists so enjoyable to read about.

– A lovely piece in the Guardian by Kate Edgley about a biking holiday in Croatia is nicely dotted with some humorous touches: Blazing saddles: Croatia on two wheels

– In a similarly (well, -ish) active vein, David Atkinson in The Daily Telegraph enjoys a slightly different side of the island of Brac by embarking on a walking holiday there: Brac: Walking in the rural heart of Croatia.

– Finally – so good, we had to give them a second entry – the truffles of Istria and the restaurants they are served in are covered by Anja Mutic in the Washing Post: Falling in love with truffles on Croatia’s Istrian peninsula.

Croatia and its sights, resorts, beaches and more received numerous accolades throughout 2010, perhaps best of all being named 4th favourite European country in the Guardian’s Travel Awards, as voted for by their readers.

And finally – as they always say in newscasts! Something we’ve delighted in reading about over the year – and it has received plenty of coverage from a very wide range of sources – is the unusual Museum of Broken Hearts in Zagreb. There’s no better way to discover a bit of it than in this short report from the BBC News website: Sad stories from the Museum of Broken Relationships.