Rovinj is a charmingly picturesque town with narrow, cobbled streets, striking many visitors as being very Italianate in nature. It is famous for the St Euphemia Cathedral, the highest church tower in Istria at 61 metres high.

The town was originally an island, but 250 years ago the narrow channel which separated it from the mainland was filled in. It is one of our favourite destinations on the Croatian Adriatic. It is so delightfully pretty, and also lively with its numerous cafes and restaurants, galleries and an active fishing port. In fact, in the mornings you can watch the fishermen come in as you have your breakfast. 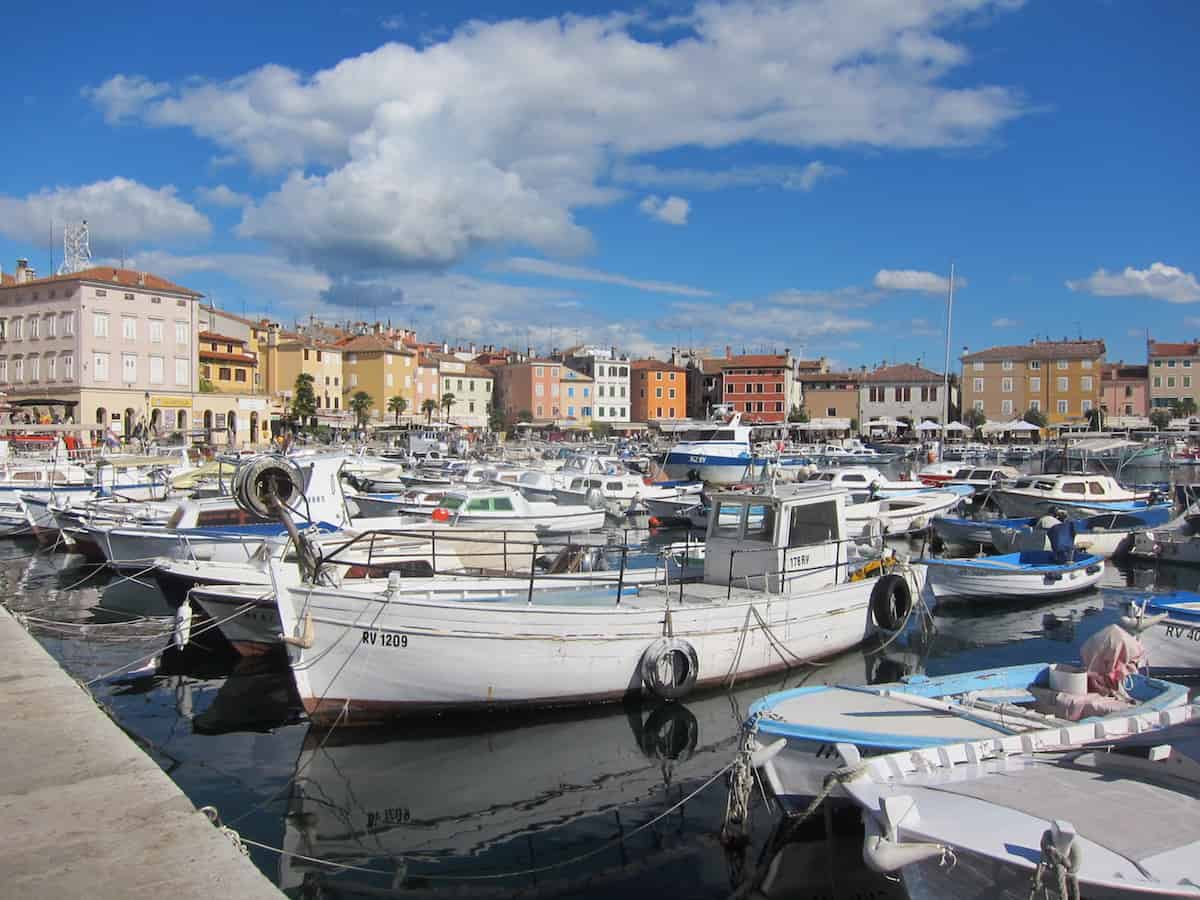 You’ll most likely fly to Pula – see our Getting to Istria page for flights to Pula from the UK, Ireland and Europe. Pula Airport is about 25 miles/40km south of Rovinj, and there are some direct buses from there to the town; see the timetable on the FILS website. For more options, take one of the frequent shuttle buses from the airport to the main bus station in Pula instead and then another bus to Rovinj (see timetables for both these bus routes on the Brioni website).

For more options, you could fly to Trieste or Venice in Italy and then transfer from there over to Istria. Flying to either of these places may be advantageous if you’re travelling out of season, or even in season and you’d like more flight choices. See our pages on Trieste and Venice for details.

As with much of Istria, findings in the area show that Rovinj’s history stretches back to prehistoric times. The town was originally an Illyrian settlement populated by the Histri. Although Istria became part of the Roman Empire in 177 BC, Rovinj (Ruginium in Latin) was never a settlement of much importance.

Rovinj became one of the first towns in Istria to fall to Venice, which it did in 1283. Attacked several times over the next few centuries, the town fortified its walls. Rovinj also saw an influx in numbers in the 17th century. During this time, people chose to escape the plagues affecting neighbouring towns such as Porec and Pula.

At this point, the main part of Rovinj was still an island that was separate from the mainland, although the town had expanded onto it. For this reason, in 1763, the channel between Rovinj and the mainland was filled in.

As with the rest of Istria, Rovinj became part of the Austro-Hungarian Empire in the early part of the 19th century, during which time it went into decline; after this empire dissolved post World War I, the town became part of Italy. In 1947, after World War II, Rovinj was ceded to Yugoslavia. It then was part of Croatia when it became an independent country.

Visiting the Church of St. Euphemia (completed in 1736) is a absolute must – this is the largest Baroque building in Istria. Built according to plans by Venetian architect Giovanni Dizzi, the bell tower on the church is a copy of the one at St Mark’s Basilica in Venice. At 61 metres high, it is the tallest in Istria. The tower has a statue of St. Euphemia on it which is mounted so it moves according to wind direction. There are spectacular views over the rooftops of Rovinj and to the nearby islands from the top of the bell tower. 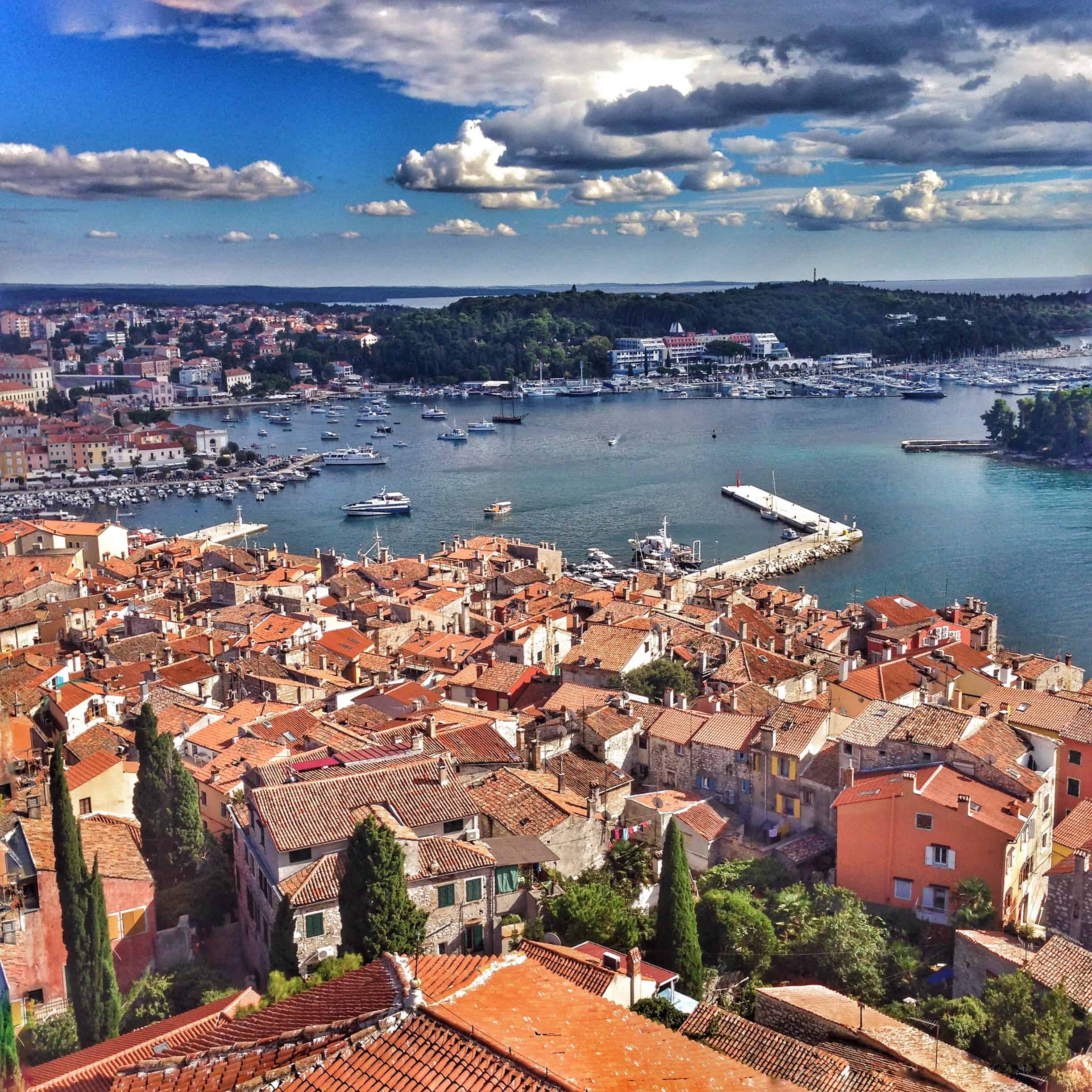 The Balbi Arch (Croatian: Luk Balbi) is from 1680 and is located at the spot which was once the entrance to Rovinj. The arch contains the coat of arms of the noble Balbi family and the Lion of Saint Mark, a symbol of the Venetian Empire.

Ulica Grisia is one of the main thoroughfares through the old part of town. It gets very busy during summer when an open air art festival is held.

The Old Town itself is another must see, and a reflection of what Rovinj was like when it was all packed onto one crowded island. The narrow, winding, cobbled streets, crammed-together houses and buildings and picturesque squares allow you to spend a lovely afternoon. Take a slow wander around before heading towards the harbour to stop at a cafe for a refreshing drink.

The Town Museum on Trg M Tita near the harbour is home to various archeological findings, and paintings and sculptures.

Rovinj Aquarium is one of the oldest in Europe, dating back to 1891. It houses various flora and fauna from specimens from around Rovinj and Istrian waters.

For places to stay, we can recommend the centrally-located, but moderately priced, Hotel Adriatic.

For more, see the Tourist Office website or Rovinj.net.

There is also a wealth of information at Rovinj.info, including details on private accommodation, property, holiday houses and the town’s gastronomic delights, beaches and attractions!