You are here: Home1 / Interview with Piers Letcher

Here’s an interview with Piers Letcher, author of Croatia: The Bradt Travel Guide. Although this interview was conducted in 2005, it’s still very interesting to read Mr Letcher’s thoughts on Croatia and his travels.

2005 sees you with a fully-updated edition of your guide to Croatia and a brand new City Guide to Dubrovnik. What can you tell us about the two books?
Firstly, the timing has been fantastic. The first edition of Croatia came out in 2003, just as the English were re-discovering what a wonderful country Croatia is, so we felt the time was right for an updated edition. And then we realised there was no comprehensive guide to Dubrovnik, one of the world’s most magical cities. So I spent a lot of 2004 in Croatia – which was an excellent opportunity for me personally of course – and then went through the first edition updating every telephone number, website address, hotel, restaurant and museum. Hard work, but essential to get everything as right as possible.

I also spent a lot of time on (and in) Dubrovnik, and I made several new friends in the city and on the nearby islands, which was wonderful. Even talking to you about this makes me sorry I’m not there right now!

Why have you published two different books? Should people be buying both?
I’d love to say ‘yes’, of course, but in truth they have very different audiences. Dubrovnik is aimed very much at the city visitor, who is in the area for a few days, perhaps on a city break or long weekend, or perhaps coming in on a cruise ship. The guide has everything you could possibly want to know – where to stay, what to eat, what to see, cultural and historical background and a whole lot more – but of course is limited to Dubrovnik, the hinterland, the local islands (Kolocep, Lopud, Sipan and Mljet) and short trips into Bosnia and Montenegro.

Croatia, on the other hand, covers the whole country in detail, including all the national parks – something you won’t find in any other guidebook – as well as the whole glorious coastline, all the islands, the major towns and cities (including Zagreb, one of my personal favourites) and the interior. For anyone going beyond Dubrovnik, this is the guide for you!

Was it easy to obtain all the necessary information from Croatian sources?
Far easier than I expected, especially with good information available from the national tourist office web site, helpful local tourist offices, and an increasing number of Croatian friends to show me around and help me search out the best places to stay, eat and drink. Indeed, there’s no substitute when you’re writing a guidebook to getting into the country and doing your primary research on the ground – and if you really want to find out what ordinary visitors are going to experience then it’s essential to do the research anonymously, so you don’t always get given the best table or shown the nicest rooms! 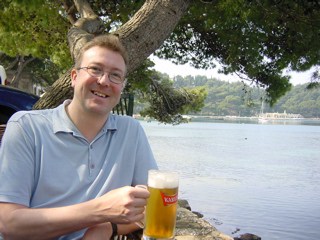 You visited Croatia and the former Yugoslavia for a previous travel guide in the 1980s, and then spent a lot of time in Croatia in 2002 researching your first edition. What changes have you noticed?
In some ways, very few changes – Croatia was wonderful when I was writing my first book in 1988 and still is; it’s remained wonderfully unspoiled. There have been significant changes, nonetheless. Back in the 1980s it has to be admitted that Zagreb was a pretty sober and lifeless place, in striking contrast to the busy and lively streets you find today, with pavement terraces thronged with customers, live music everywhere, and people smiling and laughing over a coffee or a beer. Dubrovnik looks better than it ever did before the war, with the city walls completed and Stradun re-paved. There are also an increasing number of smaller, family-run hotels springing up along the coast and on the islands, and most of the communist-era hotels have either been (or are being) restored and re-opened.

In the past two years, the biggest change has been a more subtle one, with a growing acceptance of Croatia’s past, particularly during the two wars of the 1940s and 1990s. I was very much moved by the new monuments and memorials in Slavonia last summer, and visited for example the Vukovar cemetery, as well as the site of a mass grave outside the town. It was also heartening to see the Jasenovac memorial being restored when I came through last spring, after years of neglect. These memorials are important not just for the people who suffered during the hardship of the wars but for all of us.

On our forum, we had a comment stating that “this year every man and his dog will visit Croatia”. Is there any danger that Croatia will become swamped with tourists?
“Swamped” is an emotive word, but there’s no doubt that during the peak three weeks from the end of July to the middle of August some places will get uncomfortably crowded – Porec, Opatija, Krk, Brac and Hvar spring immediately to mind, along with Mali Losinj. But even when the season is at its highest, Croatia, with all its islands and immensely long coastline, has more than enough space for everyone. Think of the Kornati archipelago, Vis, Lastovo, Mljet and the Elaphite islands, for a start, not to mention the wonderful hinterland of Slavonia, and the far too little-visited Zagorje north of Zagreb and Žumberak to the southwest of the capital. And don’t forget all the wonderful national and nature parks spread across the country, either – even in August you won’t find crowds in the Gorski Kotar or the Velebit.

We receive a number of queries from people interested in purchasing property in Croatia. Do you think the country is relatively easy place to settle into for a foreigner?
I think it’s a very easy country to settle into – but potential buyers should definitely seek expert help when looking at properties, as the rules for purchasing in Croatia are somewhat different from what people will be used to in the UK, or even across the rest of the European Union. Contracts should be studied minutely, and purchasers should be aware of exactly what they’re buying (and what they’re not). Take everything you’re told by estate agents with a pinch of salt! And take good, professional, legal advice before signing anything.

Do you have a favourite part of the country?
The hardest question of all, as there’s really so much I love. But my personal (baker’s) dozen, in no particular order, would have to include:

Is there anything else you would like to add in connection with Croatia?
Although everyone wants to go to the seaside in summer, why not try visiting Croatia during the spring or autumn? They’re personally my favourite times of year for travelling around the country, not only on the coast and islands but inland too. You’ll get an extra special welcome from hotels and restaurants, and you’ll even be able to park your car along the coast.

How does one become a travel writer?
Easy – by loving travelling and by having some talent for writing. The question you should have asked is “how does one become a published travel writer?” – the answer to which is much harder – though a willingness to write about places other people haven’t already written about or which are particularly hard to get to, and some super-human persistence certainly help. Good luck!

Thank you for answering our questions, Piers!