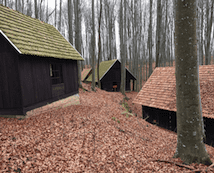 A few months ago, we featured a blogpost written by David Lavery of VeloCroatia about road cycling in Croatia – in the Petrova Gora region (south of Zagreb, near the border with Bosnia and Hercegovina) in particular. David got in touch again to share another fascinating account of his experiences of cycling in that area. This time round, he searches for the abandoned (and long forgotten) Partisan hospital that is hidden in the woods…

This really is a fascinating read, and especially of interest to anyone who likes their sights ‘off the beaten track’ and who is interested in the history of Croatia.

Vojnic is a sleepy little place in Croatia where not much happens. Although all is quiet today this small farming village has seen more than its fair share of history. We were over visiting family on the farm near Vojnic for Christmas and I wanted to explore the woods on the slopes of Petrova Gora to find what remained of the Partisan hospital that operated, hidden, during World War Two.

In an effort to stave off the excess food of Christmas I took my running stuff and an unhealthy obsession for finally finding the hospital hidden somewhere in the woods.

I first found out about the rumours of the hospital when I was researching my cycle to the top of Petrova Gora to see the abandoned spomenik monument. The recent history of Croatia is nothing if not complicated and during World War Two, with Croatia aligned with the Axis a resistance movement formed. These partisans fought in the forests around Petrova Gora against the fascism sweeping the country.

In order to hide and treat the wounded, a hospital facility was built in the woods in a steep ravine called Pišin gaj in the spring of 1942 by partisan doctor Savo Zlatic and Jakov Kanjcevic Brada. As the war waged the facility grew to over thirty facilities and treated five thousand wounded and sick soldiers and civilians from the surrounding Kordun region.

Despite all of this it was never found by Axis forces. Given this I was not confident of finding it myself.

The bodies of over one thousand partisan fighters are interned in graves in the forest of Petrova Gora having succumb to their injuries during the fighting.

After the war, the facility was abandoned and largely forgotten as Yugoslavia emerged from the ashes of the war.

In 1961 the complex was refurbished and converted into a museum, eventually being awarded the “Order of National Hero” by Tito, the strongman of Yugoslavia. By all accounts this was a popular museum to visit and there was even a youth hostel built nearby at the edge of the ravine.

It was an altogether different war that finally put an end to the hospital complex. As Croatia fought a bloody independence war, the complex was extensively damaged during Operation Storm in 1995 and then fell into disrepair. The new state of neglect reflected a wider trend in the newly formed Croatia to collectively forget about anything to do with the partisans. Welcome to the world of politicking and the complexities of national identity.

It was my turn to find the hospital.

Attempt Number One – Lost in the woods. The wrong woods.

Just as during the war, my first attempt to find the hospital ended in abject failure. I parked the car at Lovački dom Muljava and started running along the gravel path into the woods more in hope than expectation. After a few weeks off running due to an injury, my legs were screaming immediately and not happy to be pointing up hill. On they went and were only stopped when the path abruptly ended at the river after around 3km. With nowhere to go I decided, mostly on a whim, to follow what looked like a path into the woods. Every path I took lead to nowhere and I was soon forced to admit defeat. These were just paths forged by the logging trucks and not paths to any hospital in the woods. I might be thirty-four years old but it turns out that I still get excited about the prospect of exploring in the woods so it wasn’t a complete waste of time.

I got some exercise and fresh air and a renewed ambition to find the hospital. I would not be defeated.

Back at the farm I did more research and was quietly confident of finding the hospital on my next attempt.

Attempt Number Two – Finally found. Another reason I am better than the Nazis.

I parked the car at the side of the road and took a different approach into the woods. After three kilometers of running I found what used to be a youth hostel in the glory days of Yugoslavia. It is now completely lifeless but at least I knew that I was in the right area for the hospital.

Opposite to the hostel was a faint path leading up to the ridge in the forest and for lack of a better alternative I headed up in that direction, the forest silent but deafening in my isolation.

I could glimpse the faint outline of buildings up ahead almost completely camouflaged in the dense forest. As I got closer its full form emerged and I had finally, after many fruitless attempts, found what remained of the partisan hospital.

When I reached the grounds of the hospital I was suddenly struck by how alone I was. In the distance I could hear the rattle and hum of loggers but around me was nothing but silence broken only by the flutter of birds and twigs snapping under my feet.

Further into the forest the unmarked crosses stood proud among the trees. The graves of one thousand brave partisans apparently all but forgotten and now part of the forest.

Despite the isolation, when I closed my eyes I could see the life that once stood and fought here. This small corner of Croatia, unremarkable in so many ways, has been at the crossroads of many turbulent events; first during world war two and then during the Croatian war of independence in the 1990’s.

After exploring what remains of the hospital, I made my way back down the hill and ran back to the car back the way I came. Back in the summer I tried to find the hospital on my bike, my road bike struggling on what used to be a road but was now more of a stream. I realised today that if I had just cycled another two hundred yards around the next corner I would have found it.

Despite the many failed attempts to find the hospital and getting lost in the process, the effort in the end was absolutely worth it. Without hyperbole, it is one of the most amazing things I have ever seen in my life. The fact that it is now abandoned, forgotten and has no appetite to be seen means that if you do visit you will be alone with only your thoughts.

There cannot be many sights in the world, sights of such historical significance, that give the feeling that you alone have stumbled upon them.

From Vojnic, drive east on Ul. Andrije Hebranga 32 which then turns into Gornji Vojnic where you can follow signs for Lovački dom Muljava (a good place for a coffee and a crepe if it is open when you visit).

As you continue you will see a sign pointing to a road on the right for the hospital (it is quite faint and in Croatian obviously so it is easy to miss). The road has seen better days and since I wanted to run, I left my car near this junction just off the main road. If you have a 4×4 type car then I would imagine the road is passable but certainly when I went it was rutted and had half turned into a river.

The run from here to the stairs to the youth hostel which marks the entrance to the hospital is only 2.2km up a gentle slope.

When you reach the youth hostel on your left, look to the right for the faint trail/ stairs that lead into the woods and to the hospital.

Vojnic – An Unsuspecting Crossroads in Croatia

It only takes a minute to drive through the village of Vojnic and most people will pass through without realising that it stands at the crossroads of some pivotal events in recent history.

Apart from the partisan hospital, the area also saw heavy action during the Croatian war of independence. Rockets were fired from here by the Serbian aggressors towards Zagreb, a war crime that killed seven civilians.

As the war encroached into Bosnia, refugees spilled into the area. Just at the bottom of the farm is a field that once held thousands of refugees in squalid conditions. Even today when it rains heavily, nappies used in this very field get washed onto the farm.

And even now Vojnic, because of its proximity to the Bosnian border, is a popular passing place form immigrants fleeing war in the middle east and trying to get to Europe. I have seen a few young men stopped by the side of the road by the police, destined to be thrown back across the border to try again in the future.

The common thread running through all of this is war; then and even now.

Thank you, David, for sharing your experiences of searching for this amazing place. You can read the original post on David’s website here: Running Back in Time – The Forgotten Partisan Hospital. 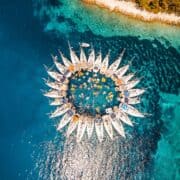 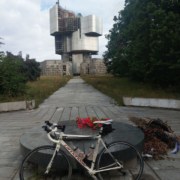 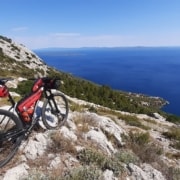