Here’s an experience of a bikepacking holiday on the island of Hvar by Simona from Italy, who enjoyed this Hvar trail holiday just last month! Bikepacking is a combination of mountain biking and camping. Read on for Simona’s experience of both of these elements on Hvar, and also the island of Brac. Thank you for sharing this trip experience with us, Simona!

March 2020. The world stopped. We are all locked in the house, astonished and fearful that the quarantine could last forever. We try to keep mind and boy busy as we can. We are looking for a motivation to keep spinning the reels even if we would like to throw them out the window!

I met Luca this way. We crossed our paths at the Winter Fat Trail in Asiago in early February and exchanged friendships on Facebook. When the quarantine started I found it on the bike trainer, spinning like crazy! He had the mission to ride for 14 consecutive hours with the virtual help of “friends and family” on Zoom. I thought: this is crazy! But I wrote to him and we met for a ride. And then, again and again, until it became a daily milestone, first on Zoom, then on Zwift. Luca became my mental coach and taught me a lot of things on riding, training, breathing, nutrition… He’s been training me really hard! We got a lot of “long rides” and running the pedals we started talking and dreaming on the return on the road ….. maybe even for several consecutive days….. maybe in bikepacking.

Luca is a true bikepacking expert. He’s been traveling that way for years. I’m a newbie. I quite never slept in a tent. But I was amazed from it. I only had one handlebar bag that I got at the WFT and I started from there. First, I got a bag for the frame. Then a saddle bag… the tent… the sleeping bag… an inflatable mat… everything! We kept making plans. I tell him I can’t stand his pace, but he didn’t give up. He made me spit blood, but he took me to the end. It would be a good test even to him, who usually travels alone.

Our first idea was to do the “Sicily Divide” and we begun to study the tracks. We decided to start in June, as soon as the regional borders reopen. But things get complicated. With the first reopening Luca has to leave to Croatia. He’s got a lot of things to fix, he’s going to do it in a week. Time starts running and it becomes two weeks and then three. … The Sicily seems everyday more distant. Then, one day, he calls me: “Mate, why don’t you join me in Croatia? I’m setting up a crazy trail! Rough! All uphill! Come and try it and give me your feedback!”. It took 5 minutes, to me, to realize the impact on my programs. But just 5 minutes! In fact, I had a great idea: it was years that Alberto, my husband, was proposing to me to take a trip to Croatia but I have never felt so enthusiastic on this. This could be the right time. I could start some days before and then he could join me with the kids to spend some more days around. All seems perfect!

I book the boat for June 12th. I’m on the line, I already see myself in Croatia; but things got suddenly complicated. First, Al doesn’t have holidays from office, I have to go alone on the 12th and get back by the 20th. Then, even worst: there are no return ferries before the 28th… I can’t believe it. It’s a conspiracy! I’ve tried everything: train, bus, plane, car….. but there’s no way to organize the trip back until the end of June! I have to keep the dates . First departure available june 27 from Ancona.” I moved the date! I’m coming on the 27th!” But Luca doesn’t make a crease: “OK! Come whenever you want! I’m here!” He tells me with his Vicentino accent.

Finally the 27th comes. I’ve prepared everything. I’m really excited about this experience. I feel like I’m 20 years old and I’m in my first experience. “Mom, please, don’t get hurt!” Andrea, my youngest kid, yells at me as I load my bike on the train from Pescara to Ancona, where I will take the boat. Some strange thoughts run into my mind, but the doors close. The train’s running, the adventure begun.

I arrive at Hvar on 28 morning at 10.30am. After 2 hours of ferry from Split. Luca is at the port! Already on the bike. He’s kind to say: “Take some rest, we’ll leave early in the morning, the heat these days is hellish”. Let’s take a walk for Stari-Grad, explaining some details of trail. The mileage, the difference in altitude, the roads. He asks me how I put myself with the technique downhill because the funds are often cut off as well as steep. My face should appear perplexed, so he reassures me immediately: “Tomorrow I evaluate you! Maybe I could fire you!

“. I don’t sleep at night. I’m soo nervous. I dreamed of this journey so long. I studied some, but not too much. I peeked at the photos that Luca posted as he traced the island, but I didn’t want to spoil the surprise. And I did well. The trail starts uphill, of course! One of those nice climbs, 10 km with gentle hairpin bends and fairly consistent slope not more than 10%. It goes up. You always go up. Luca warned me. There are no plains. Only climbs alternated with descents. Sweet climbs; Rough climbs; hanged climbs that does not rise, because in addition to being steep, they have a bumpy and slippery bottom. Sunny climbs. Infinitely long climbs. Deceptive climbs that let you think that you arrived at the top, while instead, behind the curve, there is another hidden climb. Climbs that when you get to the top you don’t believe it. Climbs that take your breath away, but when you arrive, reserve unimaginable surprises.

Hvar is weird. It has few roads, almost never coastal. To access the coves scattered along the entire perimeter of the island you have to face drops at sheer descents, quite not paved and almost never traveled. People don’t get there by land, but by sea. And they’re wild. There are no bars and organized beaches. Sometimes there are houses, accessible only by sea precisely. And then there’s the sea. A sea of blinding blue. Crystalline.You feel like you can touch the bottom. The hue changes with the light. What doesn’t change is the water temperature: FREEZY!

As you walk the ride you realize that if you want t to enjoy these incredible views you have to resign yourself to this continuous swing. So, let’s go, up and down. Luca drew the trail with care. He spent days with his partner Massimo turning and getting lost in a maze of streets unknown even to the islanders. And it has created a strenuous path but such that you fall in love with the island not only from a landscape point of view, but also for the food and the wine. He carefully selected the Konoba where to stop to eat and places to sleep and the welcome is always warm. And you can eat divinely. Octopus and lamb are a must-eat, but also the cured meats and cheeses, mostly of sheep and goat milk, are to be tasted. The people I met along the way reminded me the Abruzzo mountaineers that I usually cross when I ride “at home”: they are a bit gruff and maybe not expansive, but at the first smile they adopt you and easily open their soul to the foreigner.

We spent the first three days this way, traveling about 280 km in Hvar. Sometimes we make slightly changes to the program, like when we should have slept in a camping, but finally we got overcome by tiredness and opted for a wild bikepacking, on a beach sunbed… We were already thinking to moving to Brac, but we decided along the way. There are still few tourists and boats do not travel at full capacity, so the only way to move is to know the people who make the connecting routes. And so we set out to discover Brac.

If Hvar is rough, Brac is even tougher. Apparently more developed than her sister, it’s actually wilder. Nothing can be found outside the towns. Roads are km and km uphill, under the sun, with no possibility of find water. Water in these places is a precious resource and there are no fountains. You have to consume it consciously and stock up enough for your needs. At first we planned to spend two days in Brac together, but then plans changed. Luca had to anticipate the return to Hvar while I decided to stop in Brac and spend some time alone. I had never experienced a night in tent alone. I was worried only thinking at that, but I decided to give a try and the satisfaction of living this experience alone was unimaginable. Loneliness exasperates thoughts, feelings and senses. It lays bare with ourselves. It forces us to face our fears and overcome them. And it makes us stronger. At the end of the lap, ready to return to Hvar I felt satisfied and happy ….. and in my twenties! Now we go home. It was an incredible experience. The ride is breathtakingly beautiful and can be covered in a more or less extreme way, depending on your needs! It’s an essential experience. I haven’t come back yet but I’m already thinking about how and when to come back again. 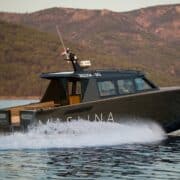 Countdown to this weekend’s FOR 2013 Festival on Hvar! 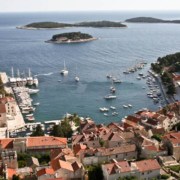 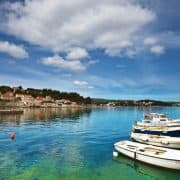 Reader’s Trip Report: Korcula and its many charms