Earlier this week, the winners of the 34th annual Conde Nast Traveler’s Readers’ Choice Awards 2021 were revealed. Covering a very wide range of categories all across the globe – from cities to islands to hotels and resorts, cruise lines to trains to airlines and airports – and featuring the votes of 800,00 participants, practically everything is rated!

It’s no surprise to see Croatia and certain destinations in Croatia featured too. First up, in the prestigious listing of the top 20 countries in the world, Croatia was voted in ninth place behind hot favourites such as Portugal (which topped the list), New Zealand, Japan, Morocco, Sri Lanka, Italy, Iceland and Greece.

Amongst the island categories, gorgeous Hvar was voted the best island in Europe! The amazing Dalmatian island beat other popular European islands such as Mykonos, Crete, Mallorca and Ibiza to claim the top spot.

The beautiful Hvar Town is obviously a big draw on the island, well known as a chic and somewhat party-happy destination. There’s plenty more besides on this island famous for its sunshine and its lavender – see more in our Hvar section.

Dubrovnik 5th in the best cities in the world category

Also rather pleasingly is the inclusion of Dubrovnik in the Readers’ Choice Awards 2021 best (small) cities in the world list – in fifth place, no less. Conde Nast Travelers states that “the beauty of this city at the edge of the Adriatic is very real” and mentions the highlights of the limestone streets, and ancient city walls and the nearby island of Lokrum.

Anyone that’s been to Dubrovnik will know what a magical place the city is, so it’s no surprise to see it included in this list. The Old Town truly has to be seen to be believed, although there’s so much more to see and do in Dubrovnik and the nearby region! See more in our Dubrovnik section.

You can see the winners in all categories on the Conde Nast Traveler website. 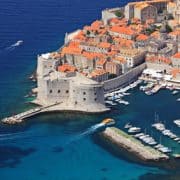