You are here: Home / Croatian Cuisine / Eating in Croatia

What can you expect when eating in Croatia? It may come as no surprise that when dining out in the country you’ll come across a mixture of Mediterranean (Italian) and Eastern European food. There’s strong Italian influences along the coast – mixed in with plenty of fish and seafood, of course – whilst more traditionally Eastern European dishes – stews, soups, goulashes, and meat dishes – can be found in places in the Croatian interior.

Croatian cuisine doesn’t exactly have the best reputation, but we think this is unfair. It may well be that Croatian food just hasn’t had much coverage in the last few decades, although this is certainly something that’s changing and you’ll often find articles on the gastronomic delights of Istria or the fabulous seafood along the coast. Even Croatia’s capital, Zagreb, has it’s fair share of fantastic restaurants!

Rough Guides also have a good rundown on food in Croatia – check out A Gourmet Guide to Croatia (August 2013).

Eating in Croatia – what to expect and what to try

As we’ve mentioned, it’s no surprise that coastal Croatia serves up some excellent fish and seafood dishes. You can’t visit Croatia without trying locally sourced mussels, oysters, prawns, octopus, squid and numerous types of fish. Not into seafood? No problem…as long as you’re into meat! Meat based dishes of all varieties are commonplace – grilled, baked and roasted. 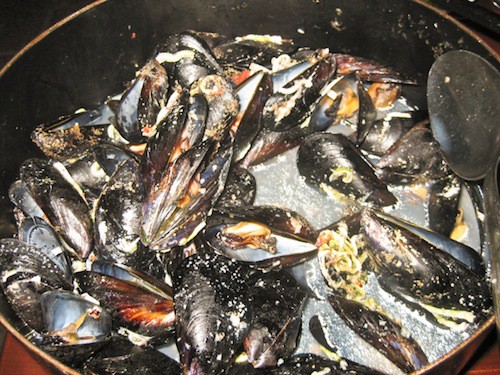 Croatian dishes of note to look out for include:

eka (or ipsod peke) in which meat (often lamb) or seafood (octopus or squid) is cooked under a bell-shaped lid that’s placed on hot coals with additional hot coals placed on top. (Vegetables are often added alongside the meat or fish at some point in the cooking.)

Brodet is a fish stew from Dalmatia that is made with mixed fish, normally including eel. It is usually served with polenta or rice.

The hvarska gregada is a typical fisherman’s dish from the island of Hvar, with different types of fish cooked in a pan alongside potatoes, herbs and white wine.

Bakalar s krumpirima (dried cod with potatoes) is a Dalmatian dish that is commonly served at Christmas time.

Pasticada is a deep and delicious beef stew, most commonly found in Dalmatia, that’s usually served up with gnocchi.

Istria is very famous for its truffles (tartufima), and you’ll find many dishes served with some kind of truffle element. Fuzi s tartufima is a pasta dish with truffles – the fuzi are shaped like a thin tube.

Look out for fritaja especially made with sparoga (asparagus) in Istria. This is kind of omelette dish that also contains other vegetables, herbs and sometimes meat.

Istarska jota is another stew that’s popular in Istria (hence the name!) which this time contains beans, potatoes and several different types of pork – including ribs.

You may come across duvec in the Croatian interior. This is a tomato-based meat and vegetable stew that is similar to ratatouille.

Individual items that are absolutely worth trying include Croatian prsut (prosciutto) and paski sir – sheep’s cheese from the island of Pag (although you can also find it elsewhere) that has a wonderful taste.

On the slightly more “fast food” end of the scale, cevapcici and burek are two culinary examples of food that has made its way from the middle East, through the assorted parts of the former Yugoslavia (and even further beyond), and are now fairly common in Croatia! Cevapcici are like very thin sausages, or kebabs, made from minced meat. Burek is a baked pastry dish that contains numerous layers of filling and pastry. The most common fillings are ground meat, spinach and cheese, although you can also find sweet options.

Pizzas in Croatia are also of a pretty decent standard…no, scratch that, they’re delicious! Don’t discount pizza when choosing to eat out in Croatia. Not only are pizza restaurants often far better quality than they perhaps might appear from the outside, but it’s also a cheap meal out.

Yum, right? Who doesn’t like desserts? Well, not the Croatians, that’s who! You’ll come across numerous patisseries in Croatia serving up the most amazing cakes and sweet treats, with too many combinations of fruit, chocolate and cream to mention. One such famous place is Vincek, who are based in several locations in Zagreb.

Other dessert or sweet specialities to look out for include fritule, a small, doughnut-type delicacy, often flavoured with a hint of fruit. They are popular around Christmas time. 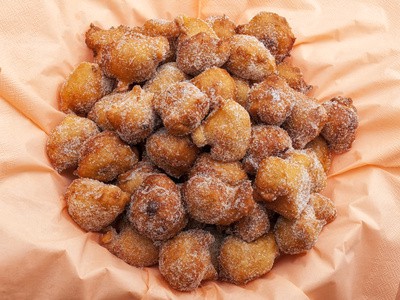 Trying out a slice of kremsnita is a must in Croatia – this is a custard and vanilla cake. The best kremsnita supposedly comes from Samobor, a small town near Zagreb.

Orehnjaca is a walnut roll that has a mild taste and is a nice alternative to all the sweet, creamy desserts. Very similar to this is makovnjaca which is a poppy seed roll.

Oh, and you MUST partake in numerous helpings of ice cream (sladoled) from the many ice cream shops and stands. Ice cream in Croatia isn’t perhaps as amazing as it is in Italy – but it’s very, very close.