Unsurprisingly, given it is the main town on the island, you’ll find that the majority of opportunities for sightseeing on Korcula take place in Korcula Town. As we’ve mentioned, the town is known as a “mini-Dubrovnik” because its Old Town is similar.

One of Korcula’s more unusual claims to fame is that it was the birthplace of Marco Polo. To this end, you will find numerous places and things named after him – and you can even visit his supposed house (see below) although the actual house that stands there today has little to do with Marco Polo.

Neatly located on a small peninsula, Korcula’s Old Town – with its stone house and pretty orange roofs – give off a familiar feel. 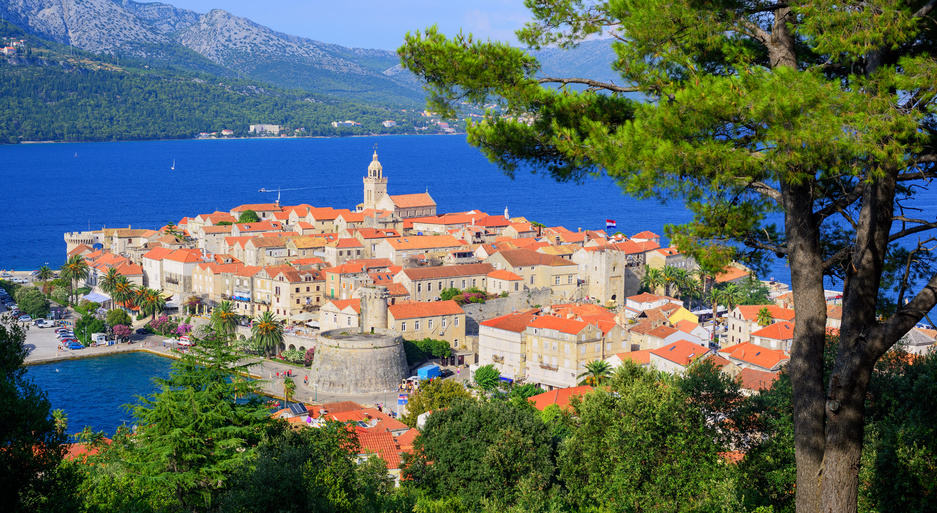 What the Old Town lacks in size, it certainly makes up in quality as it is very well preserved; the layout and structure of the Old Town and its walls stem from the second half of the 13th century. You will notice that the Old Town is laid out in a very special way, resembling something of a fishbone. The town was built in this way to protect against sea winds. 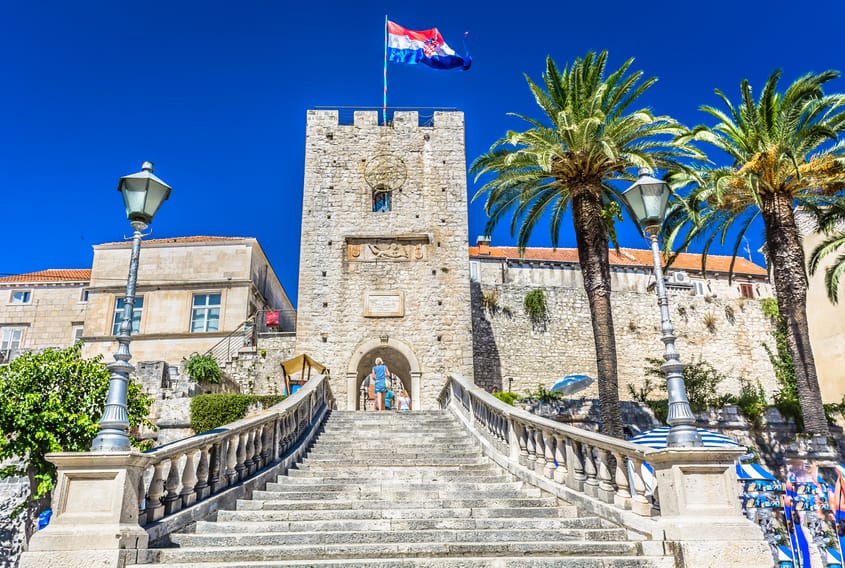 The entrance to the Old Town is through the Land Gate (Kopnena vrata) at the south of the Old Town. The gate’s front is covered by a triumphal arch built in honour of commander Leonardo Foscolo, who was instrumental in the defence of Dalmatia during the 17th century. Above this gate is also the Revelin tower which you can partially climb up for some scenic views.

There is another entrance to the Old Town to its west – the Sea Gate (Primorska vrata).

Almost bang in the centre of the Old Town, St Mark’s Cathedral (Katedrala svetog Marka) was built in the 15th & 16th centuries, and has a statue of St Mark above its entrance with figures of Adam and Eve on either side. Inside the Cathedral is a ciborium over the main altar by Marko Andrijic, a gifted local stonemason. Below this lies a restored Tintoretto, with another piece – The Annunciation – in the southern nave of the Cathedral. 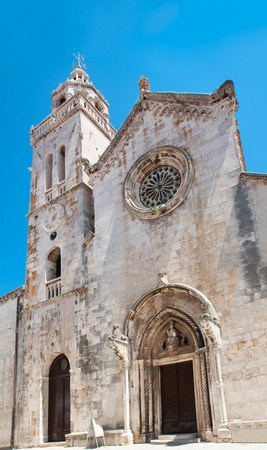 To the south of the Cathedral is the Abbey Treasury (Opatska Riznica), located in a building that was once the Bishop’s Palace, built in the 17th century. There’s a decent collection of artefacts, including church manuscripts from the 12th to 15th centuries, religious paintings, coins, pottery and more.

The Town Museum (Gradski muzej) is located opposite the Cathedral, housed in what was once the palace of the Gabrielis, a Korcula family. It is home to assorted collections from which you can learn more about the history of the town.

Marco Polo’s House (Kuca Marka Pola) – as mentioned, Korcula claims to be the birthplace of merchant and traveller Marco Polo; if he was not born in Korcula (Venice has always been the main place to call Marco Polo its son, although officially it’s still somewhat of a mystery), then he certainly was prominent in the local area and seas. A family named Depolo certainly existed on the island; this actual house does not stem from the times of Marco Polo (but was built in the 17th century). However, it may still be worth a nosy around – at least to go up the watchtower for some great views.

One of the most famous “symbols” of Korcula is the famous Moreska sword dance. Meaning “Moorish”, the dance used to depict the battle between the Moors and the Christians, although today is shown as a battle between a White King or Emperor and his followers (who are actually all dressed in red) and Black King or Emperor, who has kidnapped the bride of the White King. The two leaders’ armies do “battle”, accompanied to music, until the Black King surrenders. Performed weekly during summer, it is well worth a watch.

Sightseeing on Korcula – Tours of Korcula

If you wan to take in the sights of the island whilst mixing in a bit of adventure and exercise, how about a Korcula Island Mountain Bike Tour? This family-friendly small-group tour lasts half a day and takes in a farm in Lumbarda. It also includes lunch, and also gives an opportunity for a swim stop.

If you’re after spending some time in chic Hvar Town when you’re visiting Korcula, take a look at this Hvar Island Yacht Excursion. Cruise over to Hvar in style and enjoy coffee and ice cream in Hvar Town. Then spend some time swimming and snorkelling in the gorgeous nearby Pakleni islands. Also included is a four-course lunch aboard the yacht!