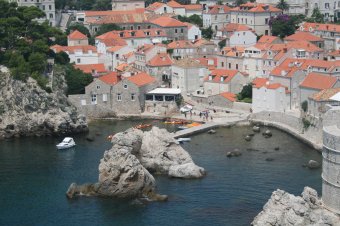 We all get up reasonably early for the next stage of our trip, Dubrovnik. Breakfast is the first on the list of things to do for the day, however and we’re greeted by standard fare at the Palace Derossi (breakfast is included): breads, spreads, ham, cheese, sliced tomatoes, eggs, tea, coffee, juice.

After checking out at the Derossi which involved a slight delay as their credit card machine wasn’t working (though this seems to be a common problem, according to TripAdvisor…hmmmm), we again make the very short walk to the bus station.

We eagerly await the 9am bus to Dubrovnik and sit attentively to make sure we don’t miss the bus, or haven’t misunderstood the destination of a coach that’s already sitting in the station. (As it later becomes crammed with Japanese tourists, it becomes apparent that it’s a local transfer bus.)

15 minutes late, the Dubrovnik bus finally pulls into the station and 30 people suddenly emerge from nowhere (where were they hiding?!) and run to the bus, piling on it as quick as they can. Seeing as the bus seemed already completely full anyway, these extra people make it packed to the rafters and the bus driver turns us – and our large bags and backpacks – down and doesn’t let us board.

What to do? The next bus was to depart over 3 hours away, which would mean 3 less hours in Dubrovnik…and the same problem as described above might occur again! Some quick thinking by my friend means we hop onto a local bus to Split instead and try our options there. (The number 37 bus which runs from Trogir to Split – it also goes past Split Airport, so would be the local bus to take from the airport if you’re heading to either of these two destinations or somewhere in between.) This takes us to Split suburban bus station, which means we still need to hot foot it or local bus it – or taxi it, in our case because of our luggage – over to the main bus station by the port.

Arriving just 10 minutes too late for the 10.30am bus, we have no choice but to wait for the next one at 11.45am. But this does give us an opportunity to cool down with refreshing drinks at the cafe there, as well as watching all the comings and goings on the large Jadrolinija and Blueline ferries in the port.

Our 11.45am Promet Makarska bus arrives and sets off promptly – we’re on our way to Dubrovnik…finally! The journey goes fairly smoothly, aside from the stop at Makarska where far too many people get on and there’s a very minor squabble over seats. (As there’s too many passengers for seats, and some have the same seats allocated.) Most passengers disembark by the time we reach Baska Voda, so an emptier bus means an opportunity to stretch out.

We pass through the Neum Corridor (in Bosnia) on the way to Dubrovnik, and get our passports checked with a brief glance at the photo page on both entry and exit. We also stop for about 20 minutes in Neum at a small supermarket (next to a restaurant that seemed to serve giant fish – what a shame there wasn’t time to eat there!), so we stock on some snacks and drinks.

Just after 5pm – and therefore a little late – we finally arrive in the magical city of Dubrovnik. The bus station there is situated in an area of the city called Gruz, so you don’t really see much of the beauty of Dubrovnik as you arrive at this pretty standard bus station building. (As we disembark we immediately get hassled by the typical “old ladies offering rooms” – though they start to desist as a couple of policemen swiftly tell them off.)

We then head towards our accommodation, and for the only time in our trip we’re separated into two groups of two. Two of us are staying just outside the Old Town, whilst my two friends stay in the Fresh Sheets hostel right in the Old Town which, I’m told, was very nice though the walk up to it (numerous steps are involved) with heavy backpacks was the only downer!

The Old Town in Dubrovnik is truly stunning – whether you’re inside it enjoying the sights, or are viewing it from the outside. It’s really one of those places that you have to see for yourself, and I’d strongly urge everyone to do so, if they get the opportunity! I can also see why the city is so popular, as well as being busy – so do be aware that if you go in the height of summer (July and August), there will be crowds. Not quite as manic as somewhere like Venice, but still quite bustling. (Incidentally, one of our common thoughts was that Dubrovnik reminded us of Venice – without the canals, of course.)

After a walk around town, we head to the most eastern tip of the Old Town and sit by sea for a bit, enjoying the sunset and watching people go by. (We also admire a waterpolo “court” marked out in the sea there and contemplate, for a brief moment, jumping in for a game.)

As we head towards dinner, we see a “pirate” ship reenactment as pirates storm land and fling a couple of sailors into the sea. Just fun and japes though, and all in aid of a party later on that night!

Lokanda Peskarija is our choice for dinner although it seems to be everyone else’s too as we have to queue (only for about 10-15 minutes, however) to be seated. I can see the reason for the queues – the restaurant has a great location right by the harbour, and the simple menu (seafood, of course) provides delicious food too.

Our choices for the night include shrimp, prawns and mussels which were all wolfed down, helped by the usual 1 litre carafe of house wine for the table. (Upon asking for a carafe of tap water, we amusingly get told this isn’t possible as carafes are “only used for wine!”).

Post-dinner involves another ice cream walk much like in Trogir (walk in Dubrovnik + ice cream = heaven) – one scoop of ice cream is a decent 7 Kunas. Passing by St Blaise’s Church, we stumble upon a group of French students doing a little concert performance, and watch them for a while.

Deciding a little nightlife may be the order of the day, we head to Buniceva Poljana square, which seems to be the location for every bar in town. Well, not quite, but there’s certainly plenty of them here, with all of the tables (and each bar’s music) seeming to merge into one giant, bubbling mass of people in the middle of the square – so definitely the place to go for some nighttime fun in Dubrovnik. (And if you’re a lazy bar-hopper, you won’t have to travel far to make a night of it.) There is also the Trubadur Hard Jazz Cafe in one corner which plays live music, if that’s more your kind of thing.

We all opt for a drink surely no holidaymaker can resist – a giant, 4-person cocktail – before we call it a night on our first day in Dubrovnik.

The next day, we decide to do a bit of cultural sightseeing first off and decide to do the walk of the Dubrovnik City Walls. There’s a few entrances dotted around town, and we choose the one near Onofrio’s Great Fountain at the end of Stradun.

Purchasing tickets (50 Kunas each for adults) from a separate ticket office (not from the guy at the entrance – he’ll only turn you away!) we climb the steps to the walls. Now, we made the mistake many people do if they are there in summer – which is to do the walk in the heat of the day. This will only exhaust you, so it’s much better to go in the late afternoon. Whatever time of day you go, however, you’ll encounter little stands selling drinks and ice cream, a little café and some souvenir shops along the walk. Overall, a great bit of sightseeing in Dubrovnik; the views are simply amazing.

Following a quick lunch at Konoba Amoret (more seafood – as if you couldn’t guess!) we decide the only thing we could possibly do in the afternoon was…to head to the beach for a much needed refreshing dip in the sea. Banje beach is a public beach, and very close to the Old Town (just east of it, close to Ploce Gate). As it’s a public beach, it understandably does get pretty busy but we found there was still enough room to set up camp with our towels and assorted beach items. There’s a special roped off area in the sea for swimming, so you needn’t worry about encountering speed boats and the like. And Eastwest Beach Club [now Banje Beach Club], a trendy bar (which turns into a trendy club at night) is situated right there too if you need a little light refreshment.

For dinner that night, we chose Dubrovacki Kantun which is recommended by a number of guides including Time Out Dubrovnik. Most of us go for the variation on a seafood theme (i.e. more seafood, but different choices then we’ve had before), whilst I try the “Dubrovacki sporki makaruli” (essentially pasta with chopped beef in tomato sauce), supposedly a traditional Dalmatian recipe from the 15th century.

Day 3, sadly, doesn’t really consist of much time in Croatia as it’s the day we have to fly home. Due to various issues (availability; high flight prices), we find ourselves having to fly withCroatia Airlines to Zagreb, and then with Wizzair from there to London Luton. It all luckily runs very smoothly, including getting a taxi from Pile Gate to Dubrovnik Airport (price: 220 Kunas) and we just about have enough time at Zagreb Airport for a snack and a bit of duty-free shopping. (Tip: if you’re after magazines and newspapers – including English language ones – they’re only sold in a shop before immigration.)

And that, ladies and gentlemen, is where our trip sadly came to an end. All of us had a fantastic time, thoroughly enjoying ourselves at every stage, and my friends who hadn’t been to Croatia before stated that they’d definitely return very soon!

Welcome to the Visit Croatia blog!
Scroll to top