You are here: Home / Croatia Destinations / Dubrovnik / History of Dubrovnik

The history of Dubrovnik is remarkable. An independent, merchant republic for 700 years (abolished by Napoleon in 1806), it traded with Turkey and India in the East (with a consul in Goa, India) and had trade representatives in Africa, in the Cape Verde Islands. It even had diplomatic relations with the English court in the Middle Ages. (There is a letter from Elizabeth I on display in the City Museum in Dubrovnik). Its status was such that powerful and rich Venice was envious of this Croatian-Slav city. 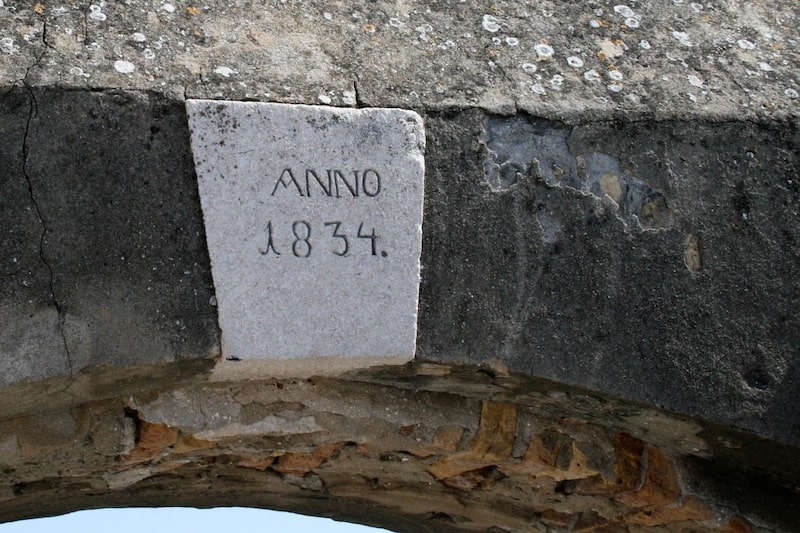 Inscription on an arch on the Old Town wall

The main history of Dubrovnik usually concentrates on a small settlement on the site of Dubrovnik in pre-historic times; this settlement, in fact, was on an island called Laus which was, at that time, separated from the mainland by a marsh. There was also a larger Greek settlement nearby in what was called Epidauros (present-day Cavtat).

An invasion by Slavs in the 7th century destroyed Epidauros and other communities in the area, causing inhabitants to flee to Laus. Laus eventually changed to Raus which in turn became Ragusa – which is the historic name for Dubrovnik. Around this time, Dubrovnik itself was founded by Croats (the name stemming from dub which means oak and dubrava which means wood – unsurprisingly, the settlement was by an oak forest).

Ragusa and Dubrovnik eventually merged when the marshland between them was filled in.

Another theory about Dubrovnik’s history which is gaining weight is that there was in fact a large Greek settlement where Dubrovnik is situated today and that the city in fact has Greek origins.

Dubrovnik expanded considerably from the 9th century onwards and as part of the Byzantine Empire, so by the 12th century it was even considered as somewhat of a threat to Venice and its Republic. It came under attack from Venice, and from 1205 to 1358 fell under its rule.

The old town was completed in the 13th century and remains virtually unchanged to the present day. Tall ramparts surround it and there are only two entrances to the old town which lead to Stradun, the city’s promenade.

In 1358 the Treaty of Zadar saw Dubrovnik cease being under Venice’s rule and instead become Croat-Hungarian, although it had a great deal of independence.

From the 13th century onwards, Dubrovnik experienced a number of important developments which increased its prominence. The Statutes of 1272 laid the groundwork for political and legal life in the city. From the 14th century trade with the local region flourished and the city also prospered industrially and culturally. Dubrovnik had a number of advanced establishments for that time – a pharmacy was opened in 1317 and an orphanage in 1432.

Fall of the Republic

Dubrovnik was hit by an earthquake on 6 April 1667, which killed about 5,000 inhabitants and destroyed much of the city, although the city walls remained standing. The city was much weakened, and when in 1806 Napoleon entered Dubrovnik there was little resistance. The Republic of Ragusa was officially dissolved in 1808 but, after Napolean’s fall, Dubrovnik became part of the Austro-Hungarian Empire in 1815.

Dubrovnik in Yugoslavia and Croatia

After World War I, Dubrovnik became part of Croatia which itself was part of the Kingdom of Serbs, Croats and Slovenes which became Yugoslavia after World War II.

Dubrovnik was subjected to considerable shelling by Serbs during the war in 1991/2 in a siege that lasted seven months. The Old Town suffered considered damage, but was quickly restored to its former beauty.