Summer may have finished, by visiting Croatia in October is still possible…and highly recommended! We take a look at what you can see and do this month in Croatia, as well as what you need to know for travelling there.

Travelling from the UK to Croatia in October

Latest update As of 24th October, fully vaccinated travellers returning to England from Croatia (or indeed, from anywhere else) can book a cheaper lateral flow test or a PCR test for the required day 2 test. See Travel to England from another country during coronavirus on the GOV.UK website for more details – and to check the rules for Wales, Scotland and Northern Ireland.

On Monday 4th October at 4am, the travel rules for England change. The green and amber lists are being combined into one ‘safe list’ whilst the red list remains…red. Croatia is currently on the green list, so will definitely be on the new safe list from this date.

The rules for travelling back from a safe list country – including Croatia – from 4th October vary depending on whether you are fully vaccinated or not.

If you are fully vaccinated, to travel back from Croatia to England, you need:

If you are NOT fully vaccinated, to travel back from Croatia to England, you need:

This is a change as, up until 4th October, non-vaccinated and vaccinated had to do a pre-departure test to return to England…and non-vaccinated travellers did not have to quarantine for 10 days.

Travelling from elsewhere to Croatia in October

As well as the major change mentioned above – that double vaccinated travellers from the UK no longer need a negative test to enter Croatia – there have been some additional rule changes as of 1st October 2021:

Take a look at our Croatia Travel Restrictions page for other regulations, and do also take a look at the rules posted on the Ministry of the Interior website.

Flights from the UK & Ireland to Croatia in October

There are still plenty of flights to Croatia if you fancy an October break! They include:

That’s a lot of flights! Take a look at our Flights to Croatia from the UK & Ireland 2021 page for the full schedule.

Events in Croatia in October

There’s absolutely loads on in Croatia this month! Take a look at some of the highlights below:

Weather in Croatia in October

The weather forecast is looking exceedingly lovely for the first part of October – along the coast (and the further south you go, the better your chances of warm weather) in places such as Split and Dubrovnik, you’ll find temperatures of low to mid-20s Celsius every day. There are occasional rain showers forecast, yes, but most days will see plenty of sun. The long-range forecast for October is the same. Further north up the coast temperatures will be similar if a few degrees less; inland likewise also with more mixed weather (more rain).

Take a look at the Croatian Meteorological Service website for forecasts.

What to See and Do

October is the month that straddles the seasons in Croatia – whilst the early part of the month may well be very pleasant indeed (see under “Weather” above!) the temperature slowly declines. On the coast you’ll enjoy plenty of sunshine although it will probably be a little too cold for sea swimming; hitting the pool, meanwhile, should be okay! We would certainly recommend heading to destinations in and around Split and Dubrovnik, as well as Istria, for a holiday this month. The islands, however, will be a bit on the quiet side…so we’d suggest leaving these for another trip next year.

October is traditionally the month that ‘tourist facilities’ (restaurants, bars, cafes and similar catering to visitors) start shutting up shop towards the end of the month before the cold months set in, so you’ll still be able to enjoy these.

This October is Croatian Tourism Month (unfortunately, the website appears to be in Croatian only!). Some tourist services, facilities and venues – including accommodation, restaurants and cultural attractions – across the country are offering discounts of 35% off.

Do be aware that ferry/catamaran schedules (i.e. Jadrolinija‘s) change from high season to low season ones in early October, so take this into account if you’re planning on travelling around. Bus schedules will also see fewer buses on long-distance routes, but you’ll still have plenty of choice.

October is a great month to make the most of some of Croatia’s top experiences – without all the summer crowds – particularly with the country taking on an autumnal hue. If you’re able to do, we’d certainly recommend a trip to one of Croatia’s national or nature parks, such as Plitvice or Krka.

Zagreb is an excellent choice for Croatia in October – there’s plenty to explore (sights, restaurants, experiences, even shopping) and it’s a very easy city to navigate.

We hope you enjoy Croatia in October! 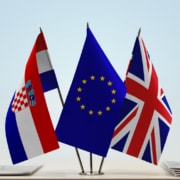 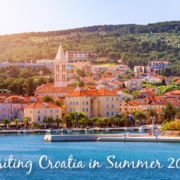 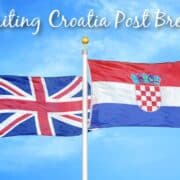 Ryanair announces more routes to its new Zagreb base – including from...