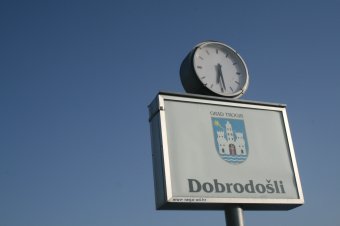 We rise early in the morning on our third day in Croatia, the day we’re moving on to Trogir and our first sights of the coast and the sea of the whole trip. Exciting times, as you can imagine; we were a bit like little kids setting off for the seaside.

We hitched our bags to ourselves and made the short walk to the bus stop for our 8.30am bus. Our bus was already waiting at its platform; we boarded to find we had been allocated four seats right in the back row – again, we find we’re a bit like schoolkids, only the naughty kind this time. Alas, a Croatian traveller joined us for the remaining backrow seat, so we couldn’t misbehave or at least use the spare seat for playing cards – I suppose she played the role of teacher, or something! (Note: I joke of course – we weren’t really going to misbehave!)

A couple of hours in, we stop off at a petrol station which had an unusual mountain-hut theme, even displaying stuffed animals such as a bear and a racoon (which looked very authentic). Shunning the high petrol station prices, we eat our pre-prepared sandwiches (cheese and kulen, yum!) outside in the hot sun.

On with the rest of the journey, which goes pretty smoothly. The new motorways in Croatia are pretty impressive, if motorways can ever be impressive, and we didn’t encounter any problems or traffic on our journey down. At a certain point, the road hits the coast and we see the sea and our excitement rises – we start snapping photos of the beautiful blue water and the bobbing boats.

We reach Trogir just after 2pm, and the first thing we do is to enquire about an onward bus to Dubrovnik for the next day. The lady at the bus station tells us that tickets for the two buses (at 9am and 12pm) are only sold on the bus itself. Which doesn’t present itself at a problem – yet. But more about that tomorrow.

We walk to our accommodation – the Palace Derossi – which takes no more than 5 minutes even with our heavy bags. Very luckily, the Derossi is just over the bridge onto the island of Trogir. We booked our rooms fairly last minute (2 days before!) on Hostelworld.com and paid approximately £35 per person for that one night. We chose the Palace Derossi as the price seemed about right, they had availability for two groups of two and the reviews on TripAdvisor seemed favourable – though one of the very few negative reviews for the place made me laugh so much, it actually made me like the Palace Derossi even more: “…Palace Serossi [sic] is not Palace at all and even not hotel”. Good going, Sherlock – I’m not sure what his/her idea of a hotel is (I didn’t have any problems with the place!) but how could one expect to actually be staying in a palace (for that price, at least!) is beyond me!

We decide, now that we’re finally on the Croatian coast and having just spent 5 hours on a bus, that the most important thing to do first is to go for a dip in the sea to cool down! After enquiring at reception for swimming options, they helpfully give us a map and tell us of a number of beaches, including those we could reach by boat. We decide to head to the nearest one that’s on the island of Ciovo (which is joined to Trogir by another very short bridge) by foot and find that the “beach” is a bit of a stretch of the imagination; this beach is just a small pebble/concrete platform beach right by a road. I’m actually making it sound worse than it was; in all fairness, it was fine but not the kind of place you’d spend all day at. Anyway, you can swim in the sea – and that’s the main thing!

Back into town to change and head out for a bit of sightseeing, drinks and dinner. Trogir is a very small town and island, so it’s easy to walk around and see all the sights. We walked through some of the Old Town including to the small fortress at the eastern end of the island, and up and down the Riva, marveling at the fantastic yachts moored in the harbour there. (And secretly wishing we were on one.)

We stop off for some specially priced, happy hour cocktails at one cafe (30 Kunas each) for a pre-dinner drink. Then off we head to dinner – our guide book recommended no less than three restaurants on a street named Augustina Kazotica, so we troop up and down to look at the menus before deciding on Skrapa, described as “cheap and cheerful”. I would actually describe it as “delightful and delicious” – and my comment isn’t even related to the cheerful waiter who offered us a free drink of travarica before our meal. (Travarica is a Croatian herbal liquer…which is very strong!)

Now that we were on the coast, it was time to properly tuck into some seafood, something that we’d been waiting for for the entire trip. We opt for some delicious black risotto (with cuttlefish), sea bass and shrimp, washed down with another 1 litre carafe of house wine. 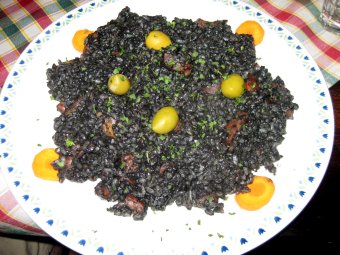 Post-dinner, we opt for another little walk around town and get almost immediately get distracted by an ice cream stand. I’ve always known Croats as really into their ice cream and each stand always displays a riot of colour with assorted fruit flavoured options. Happy with seafood and ice cream in our tums, we decide to turn in for the night. 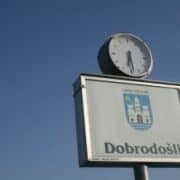