You are here: Home / Croatian Cuisine / Drinking in Croatia

If you’re intrigued about what you’ll find when drinking in Croatia, you’ve come to the right place! Here, Visit Croatia presents some of the wines, beers, spirits and other drinks that you may encounter on your visit to Croatia.

As an Eastern European country, it may come as no surprise to learn that beer is pretty popular in Croatia. There are numerous beers in Croatia for you to try whilst on your holiday – perhaps the best known are Karlovacko (brewed in Karlovac – hence the name), Ozujsko and Pan.

You may also encounter Osjecko (in fact, the oldest beer in Croatia – first brewed in 1697 and from Osijek, again hence the name); the dark beer Tomislav and the Slovenian produced Lasko. 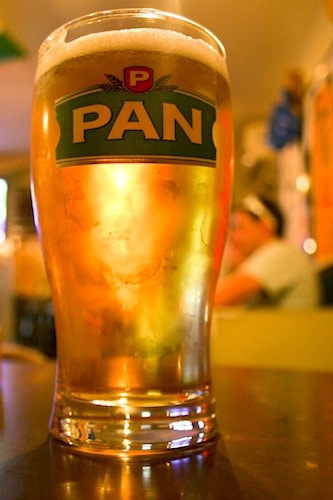 A pint of Pan in Split

In the last few years, flavoured beers (beer mixed with lemon or grapefruit) have appeared in Croatia. Look for Ozujsko Limun/Grejp or Karlovacko Radler. These are generally less alcoholic than normal beer.

Croatia isn’t perhaps all that well known for its wines, but we put that down to people simply not having much of an opportunity to taste them outside of Croatia. This is something that’s rapidly changing, as more and more wines are being exported. Croatian wines are even appearing on the shelves of British supermarkets, such as this Grasevina being sold by Marks and Spencer.

When you come to Croatia, we really urge you to try some of the local wine – we have no doubt that you’ll enjoy it. (When you’re not trying the beers or joining the locals in brandy drinking, that is.) Some of the most famous Croatian wines include the red Plavac Mali from the Peljesac Peninsula and the whites Posip (Korcula/Peljesac Peninsula); Grk (Korcula); Malvazija (Istria); and Grasevina (Croatian interior). Prosek is a sweet dessert wine, most common in Dalmatia.

Wherever you are, ask your restaurant to recommend a Croatian wine to you.

You can also visit local wineries and wine producers whilst in Croatia. In particular, there’s a great number to tour on the Peljesac Peninsula, Istria and Slavonia.

If you’ve ever been to any Eastern European country, you may have found that spirits are big. Not so much that everyone just drinks spirits and mixers all the time (who needs a mixer?!), but that everyone and their dog distills some kind of fruit brandy (rakija) at home – or at least knows someone that does, and has a ready supply of a bottle of some “fine” liquor.

It will be very rare to not encounter a Croatian spirit during your stay in the country – restaurants will often serve you up a little something prior to your meal. If you’re staying in private accommodation or with friends – well, then, you’ll barely be able to escape.

Yes, these drinks are VERY strong. Try and sip them slowly.

One of the weirdest drinks that you may encounter in Croatia is Bambus. This drink actually “exists” in many countries around the world, but in Croatia and the other former Yugoslav republics…this is the name that it goes by. What is it, you may wonder? It’s red wine mixed with cola, and served with ice. We’ll leave you to decide whether you actually want to partake in some bambus…