Ston is by and large known for  three things – its very well preserved town walls, its salt works, and its mussels! If you pay a visit to this part of the Peljesac Peninsula, we’re sure you’ll encounter at least two of these three things!

The town can easily be reached by local buses from Dubrovnik; journey time is around 1 hour and 15 minutes. You can see schedules on the Dubrovnik Bus Terminal website – click on the Prigradski/Suburban link.

As mentioned, the town walls are perhaps what this little town is best known for – and rightfully so. The walls are much longer than those of its more famous neighbour Dubrovnik at 5km in length, making them the longest defensive structure in Europe; they are sometimes referred to as the ‘European Walls of China”.

Built in the 14th and 15th centuries as a additional defence for the Republic of Ragusa (Dubrovnik) and to protect the lucrative salt pans in the area, the walls also consist of three fortresses – Veliki Kastil (in Ston), Korula (Mali Ston) and Prodzvizd Fort – and a number of towers. The walls once stretched for as long as 7km, but parts were destroyed following the fall of the Republic of Ragusa, and during the 19th century when the stone was used to construct other structures. The walls have long since been protected and, following extensive renovations, were open a number of years ago to visitors. 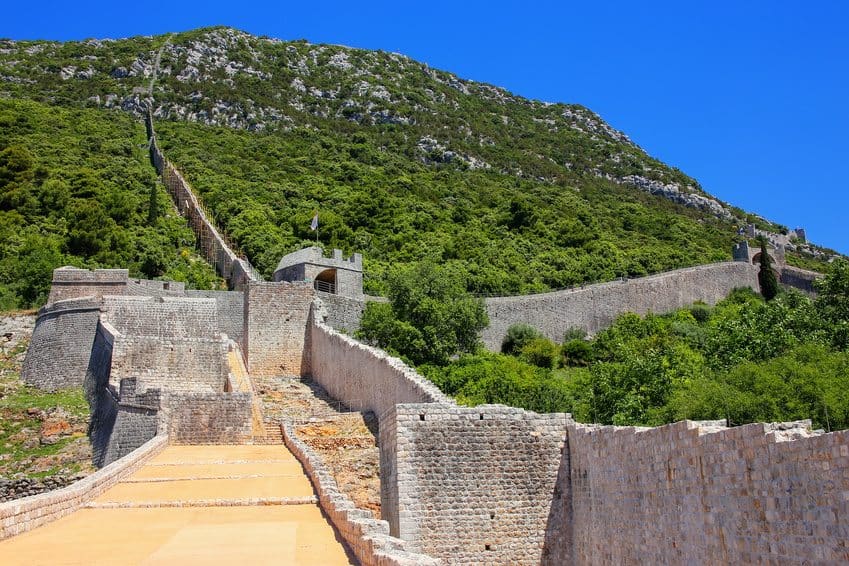 The walls are open year round to visit (with longer opening hours in summer). More on the Walls of Ston website, including opening hours and ticket prices.

The saltworks were established as far back as the 13th century (although the harvesting of salt in the area is thought to go back much further). The production of salt contributed to the wealth of the Republic of Dubrovnik. These days, the harvesting of salt from the sea is still done in a traditional manner.

You can not only visit the saltworks, but you can even work there! Summer camps are run every year for willing participants – more information can be found at the Solana Ston website.

Mali Ston (meaning ‘Little Ston’) is about a kilometre and a half away on the upper side of the Peninsula. You can easily walk between the two places.

Mali Ston Bay is where you will find the oyster beds that produce what are commonly referred to as some of the most delicious in the world! (If you can’t make it down to this part of the Peljesac Peninsula, fear not! These oysters can also be found at many other restaurants in Dubrovnik and the Southern Dalmatian region.)

If you do make it to Ston or Mali Ston, you must consider dining at a local restaurant to try out some of these famed oysters, right from where they are farmed.

There aren’t many hotels in this part of the Peljesac Peninsula, although there is the Hotel Ostrea in Ston. Private accommodation – apartments and rooms – is available.

You can find out more the town and what there is to see and do there at the Ston Tourist Office website.