Here’s our guide to sightseeing on Vis.

Despite its fascinating history, there aren’t many sights of archaeological interest to see on Vis and in Vis Town. Some items that you can see include a small section of the town wall and other walls from the time of the Greek colony, as well as some remains from a Roman bath.

For those intrigued by Vis’s archeological findings, the Archelogical Museum, Vis Town is a better place to visit to get your fix. Housed in a former fort built when the island was under Austrian rule, there is a good collection of items from the times of the Greek colony Issa on the island.

The Franciscan Church and Monastery, Vis Town was built in the 16th century on the site of a Roman amphitheatre, the church and monastery is in fact located on the Prirovo Peninsula. 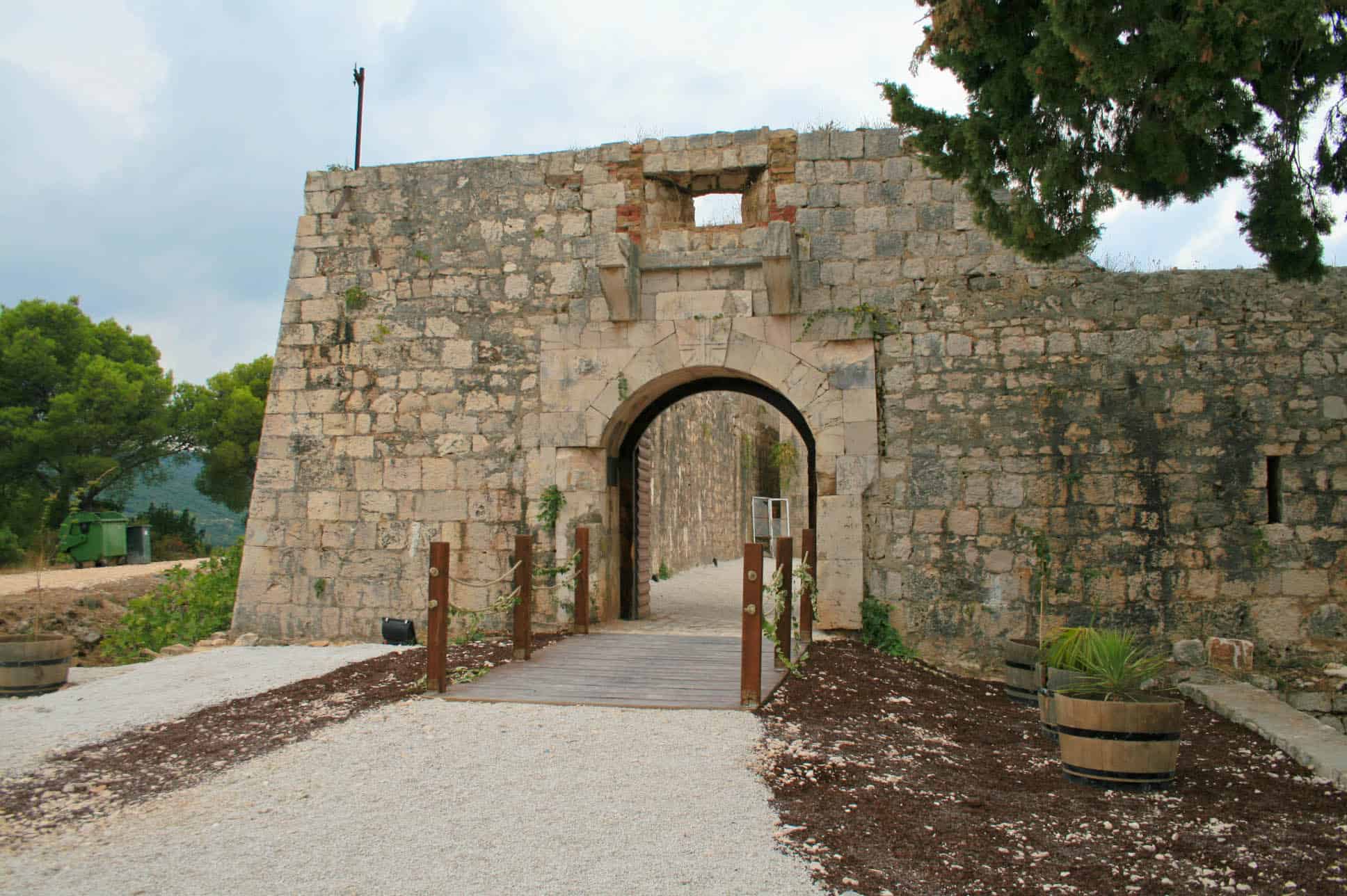 Just outside Vis Town (around a 20 minute walk, 10 minute cycle or 5 minute drive) is Fort George. To give it its full name, it’s actually Fort George the Third, and (as the name suggest) was built by the the British in 1813 when they set up a base on the island after they’d defeated the French at sea. The abandoned their fortresses only a few years later and, if you pay it a visit, it does indeed look rather crumbly (although it is now being looked after). It is still interesting to have a quick poke around during daytime, and there are some spectacular views out to sea to get you snap happy. During summer, however, the fortress’s garden is used as an amazing setting for an entertainment and party venue – see more on www.fortgeorgecroatia.com. 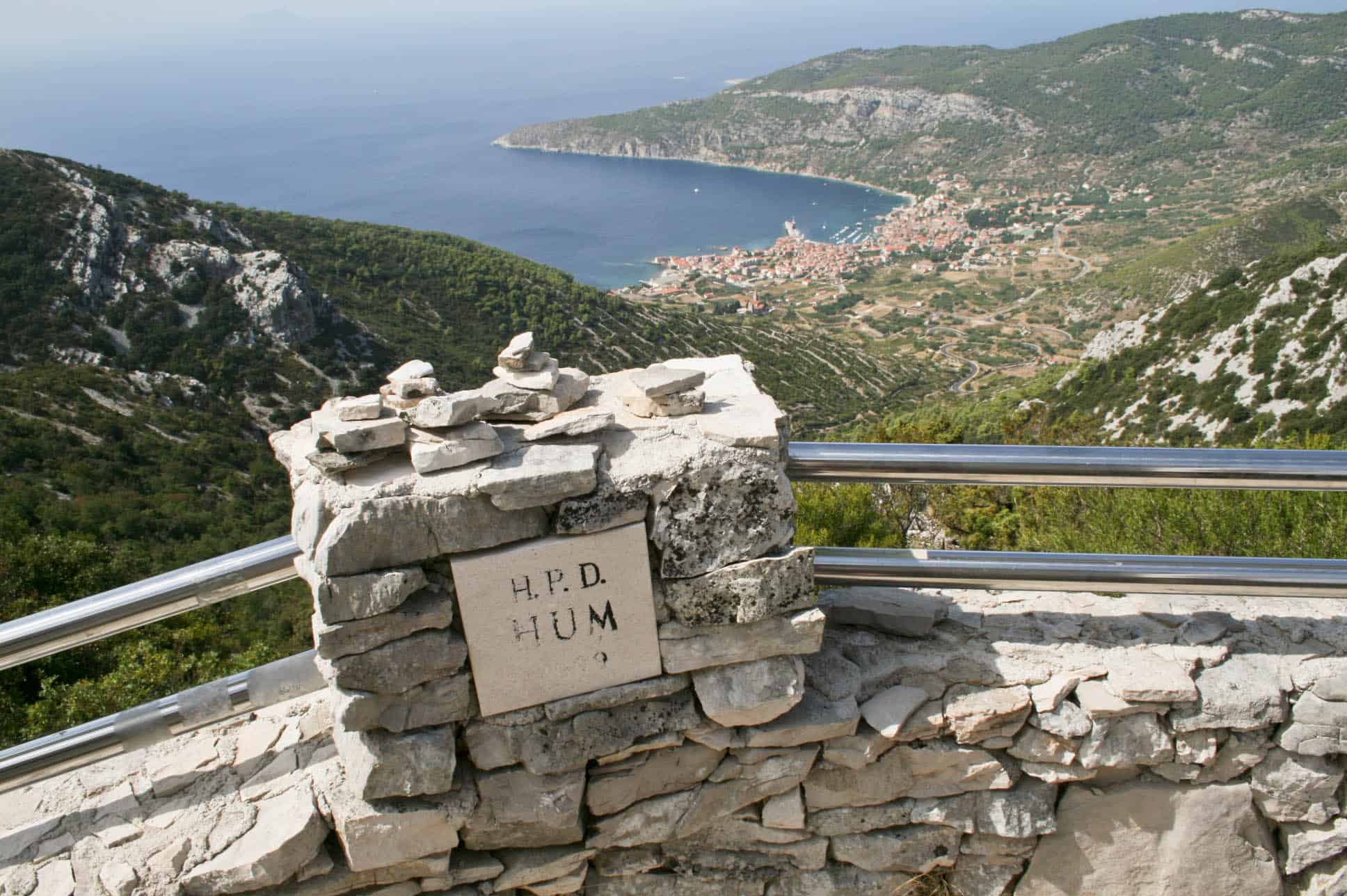 Hum and view of Komiza

Vis is the perfect size to rent a bike (or moped…or car!) for a few hours and go exploring. In particular, it’s great to ‘climb’ above either the towns of Vis or Komiza and look back down for some absolutely gorgeous views. The highest point on the island is called Hum – at 587 metres high, Komiza down below you is a stunning sight, as is looking out to sea. There’s also a very small chapel on Hum.

Komiza has a very pretty curved harbour and cute little streets that make it a pleasure to walk around in. You’ll see a 16th century Venetian tower that now houses the fishermen’s museum. On the hill above Komiza is the Church of St Nicholas. 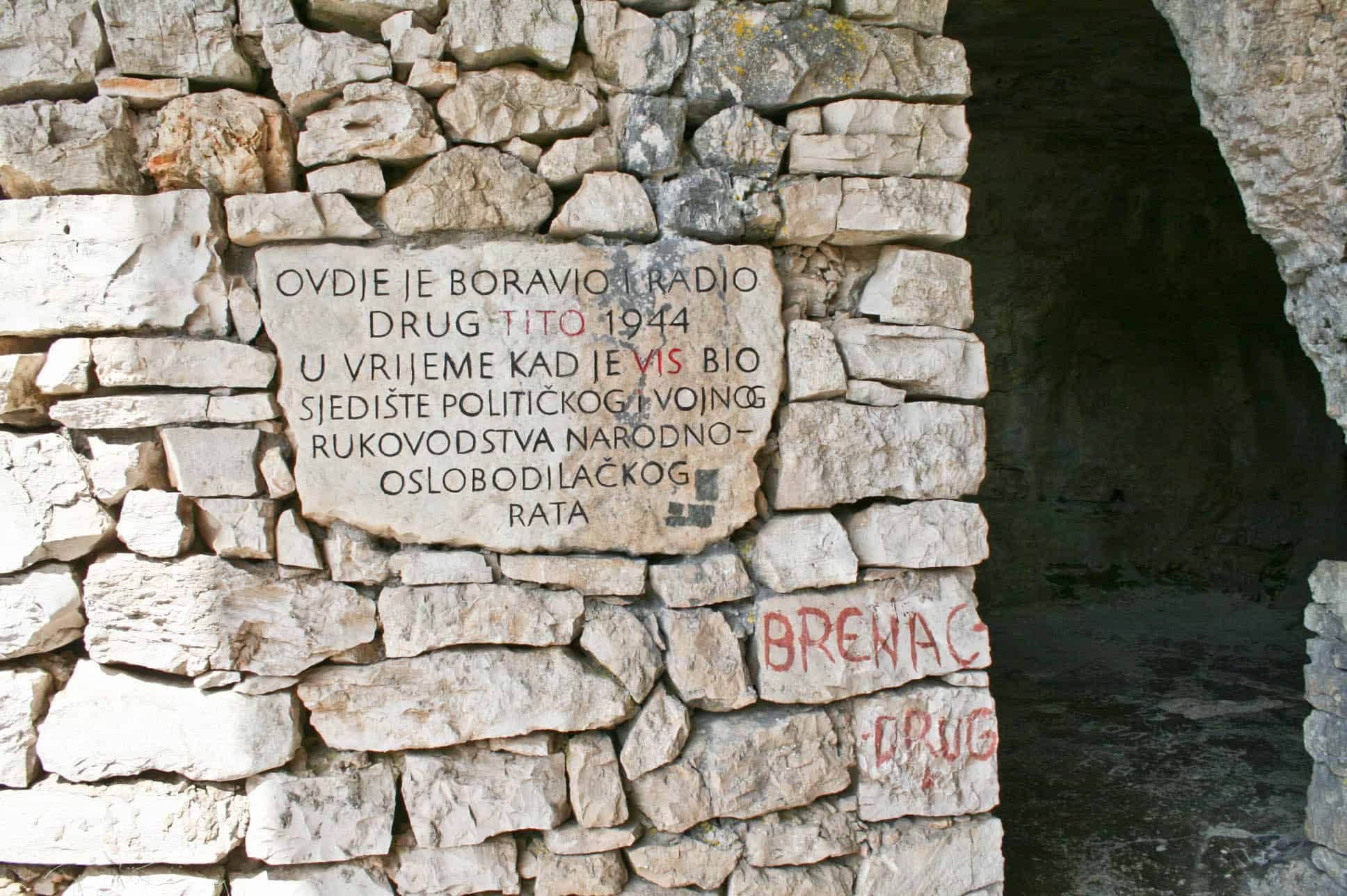 As we’ve mentioned on the other pages in this section, the island played an important part for the resistance movement during World War II (housing resistance leader Tito), and was a naval base during the days of the former Yugoslavia. As such, the island is home to a number of military buildings, bunkers and more. Some of these are best visited on a tour (or at least ask at your accommodation/a local agency how best to get to them) but Tito’s Cave can be visited easily enough on your own – just make sure you know where it is on the island before setting off. (There’s a signpost that marks where on the main road you need to turn off – once there, just follow the road until it ends and then climb the steps.)

Tito was indeed ‘hiding’ out on the island of Vis during World War II, but as to whether he was actually hiding and working in these caves is more likely to be a legend rather than reality. Still, you can come and see his supposed cave as well as a ‘companion’ one where Yugoslavian Communist Party meetings were held – Tito got the larger, two-‘room’, obviously. There are signs (not in English) outside each cave – we feel that most visitors might be a little disappointed (they are, literally, just caves) although those with a keener interest in history might be a bit more enthused.

Other Military Buildings on Vis

As mentioned, if you do have a particular interest in viewing some of these structures, it’s probably best (and easiest) to join an organised tour. One of the additional sights you might see are the submarine pens that were used during the times of Yugoslavia.

Kut is technically a separate little area or village to Vis Town, but is only a short walk around the bay from the island’s main settlement. A walk along the seaside path to Kut is very pleasant, particularly in the early evening (and perhaps with an ice cream in hand) – pop over, have a drink or two and check out some of the swish yachts in the harbour. Stay for dinner, as there are a number of options, or work up an appetite by heading back to Vis Town!

Enquire locally on the island of Vis for day-trips to the small island of Bisevo, around 4.5km southwest of Vis. Bisevo is famous for its caves, the most well-known being the Blue Cave (Modra Spilja in Croatian). At around midday and just before during the summer months, sunlight enters the cave in such a way as to colour the interior entirely blue, with the waters being turned silver.

It’s a very popular attraction during summer, so be prepared to encounter large crowds of boats, all waiting their turn to enter. However, if weather (or rather, sea) conditions are bad, it may not be possible to visit.