You are here: Home1 / Makarksa 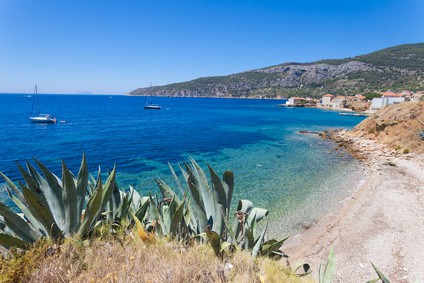 Who would have thought it? We’re over halfway through August, which means we are most definitely hurtling towards the end of summer. (Although, personally, I definitely think summer runs until the seasons change in September. But then, I like to be an optimist about the weather.)

Some of you who are perhaps yet to take your summer hols, or are looking for a late summer trip to ease yourself back into autumn ways, may be thinking of visiting Croatia in September. You may be pleased to learn that September is considered the best month to visit amongst those in the know – the weather is still good (yes, you will – most probably – still be able to swim in the sea!), the high season crowds will have departed for home by the end of August, but everything – tourist-related – is still very much open.

However, you probably have a whole list of questions – what’s there to do? Where shall we go? We’re here to help you with these questions and more if you’re considering visiting Croatia in September!

The weather in Croatia in September

First things first. This is something we always get asked – is the weather in Croatia still good in September? Yes, very much so. It may come as no surprise really – as a Mediterranean country, the summer weather continues long into September. The last few years have seen very hot summers in Croatia, and this glorious weather definitely hung around in the ninth month of the year. (In fact, even into early October too!) This year there’s also been a rather hot summer in Croatia with temperatures in so many places reaching the very high 30s celsius. In fact, during July, temperatures for practically the entire country were classified as being “very warm” or “extremely warm” (poor Vis was the only place in Croatia to simply be “warm”), whilst most of the country was considered to be either “dry” or “very dry”.

All in all, we expect the weather in Croatia to be great this September! The Croatian Meteorological Society has plenty of forecasts in English – at the moment, they obviously don’t show much data for September, but take a look at their seven-day forecasts a little closer to the time.

The sea off the coast of Croatia – having had all summer to warm up – will be great, temperature-wise, in September. Yesterday, for example, temperatures reached around 23/24C for many places, with the sea a few degrees colder in the north of the coast.

Disclaimer: Yes, of course, the weather everywhere is starting to turn a little crazy. So don’t hold it against us if conditions in Croatia inexplicably turn winter-y during September. That’s definitely not supposed to happen. And it’s very, very unlikely to happen. But if anything insanely crazy, weather-wise, happens…don’t blame us!

What’s on in Croatia in September?

Croatia has established itself as something of a prime festival destination in the last few years, with more and more dance festivals being added all the time to each year’s calendar. September is when the festival season winds down, but there’s still a couple of events taking place, both in Istria. The brand-new-for-2013 Unknown is being held in Rovinj from 10th to 14th September, with names like Jessie Ware, The Horrors, Jamie xx and SBTRKT all on the bill. Now in its second year, the electro festival Dimensions will be on in Pula from 5th to 9th September, making use of Fort Punto Christo that’s close to the town. (Dimensions is the “little sister” of Croatia festival favourite Outlook, which is on itself in Pula from 29th August to 2nd September.)

For the less dance music type events, there’s the Split Film Festival on from the 14th to the 21st September. The historical festival Gioistra – now in its seventh year – will be held in Porec from 13th to 15th September, with assorted costumes, revelry, sports, street entertainers and products on sale, all re-enacting 18th century times. The second Korkrya Baroque Festival is an international music festival on the island of Korcula, being held from 7th to 13th September. Zagreb hosts both the general entertainment festival RujanFest (literally, ‘SeptemberFest’) from the 13th to the 22nd September, as well as the 46th edition of the International Puppet Theatre Festival (9th to 14th September).

For those more keen on sports events, Croatia will host the Davis Cup tie against Great Britain in Umag (which means clay!) on the weekend of 13th to 15th September. And yes, Wimbledon champ Andy Murray is expected to play. Tickets can be bought on the ticket portal Eventim.hr.

Be sure to pop into the tourist office of wherever you are to ask for events taking place locally!

Where should I go in Croatia in September?

As we’ve covered so far, the weather will be great in September, so it’s hard not to pick a location on the coast. Dubrovnik should be as busy it always is, and there’s certainly a large number of cruise ships scheduled to dock during that month, bringing thousands of (day trip) passengers at a time. Split has had a great season so far, so it wouldn’t be any surprise to see this place as bustling as it has been. (Seeing as it’s Croatia’s second largest city, it is relatively lively all year round!) Some of the more popular islands, such as Brac and Hvar, and other popular locations on the coast (the Makarska Riviera) are still likely to receive a good number of visitors, even whilst the season starts to wind down.

If you’re after something a little quieter, perhaps consider the most outlying of all the larger Croatian islands – Vis. As a quieter and slightly mystical destination any time of year, we think this place would be divine in September. Other islands to check out include those in the Kvarner bay  such as Krk, Cres, Losinj or Rab, all of which are perhaps not as well known amongst non-Continental European visitors.

Istria is of course one of the most popular destinations in the whole of Croatia, with delights such as Porec, Rovinj and Pula all located here. The county has suffered a slight fall in visitor numbers this year, but will still see good numbers overall. If you’d like to visit, why not consider something like a foodie or activity-based holiday – two things the region does very well! Check out Istria Tourist Board’s guides to gastronomy and sport.

From a logistical point of view, almost all flights from the UK to Croatia still operate in September – and well into October too. The one exception to this is Ryanair’s flights from London Stansted to Rijeka Airport stopping at the end of August. See our Flights to Croatia page for details of all routes to Croatia from the UK.

Do note that in almost all cases, ferry schedules will still be running to summer timetables until the end of September. Certainly, almost all of Jadrolinija‘s local routes remain the same until the end of September, as does their twice-a-week coastal route that runs Rijeka – Split – Stari Grad (Hvar) – Korcula – Mljet – Dubrovnik and vice versa. The exception lies with some of their international sailings (to Italy) that reduce in frequency in September, and again further in October. Venezia Lines‘ sailings between Istria and Venice will only operate from Porec and Rovinj during September.

Or check out Adriagate – they offer last minute discounts on accommodation for destinations all over Croatia!

All in all, if you’re visiting Croatia next month, we hope you enjoy your stay! Why not drop us a line on email, Twitter or Facebook to let us know how it went – we’d love to hear from you!