You are here: Home1 / Tourism stats

Croatian Television today reported on some interesting tourist statistics for last year, revealing that 10.6 million tourists enjoyed a holiday in Croatia during 2010, up 3.2% on the year before. These tourists stayed for 56.41 million nights in total, which is also an increase – of 2.6% – on 2009.

These figures include both foreign and domestic (i.e. Croatian) tourists, although the number of the former far outweighs the latter. 86% of tourists – or 9.11 million – were foreign visitors, who stayed for 90.4% of all visitors nights, amounting to 51 million nights. These figures for foreign tourists are up 5% and 3.6% on 2009 respectively.

Although domestic tourist make up only a small proportion of visitor numbers, their numbers actually declined in 2010 compared to the year before. Croatian tourist numbers went done by 5.3% in 2010, and they stayed for 5.8% fewer nights.

Yesterday’s Slobodna Dalmacija featured an interesting article on passenger numbers at Zadar Airport, with 2010’s seasonal flight timetable coming to an end this past weekend.

This article reveals that this year, 270,000 passengers passed through the airport, which adds up to a very healthy 28% increase on 2009 – and a massive jump from 2006, when only 65,000 passengers travelled through.

64% of travellers arriving at the airport flew with Ryanair, which has links from eleven European cities in England, Scotland, Germany, Ireland, Belgium, Sweden, Italy and Norway to Zadar. Germanwings flights from four cities accounted for 17% of passenger traffic at the airport.

In total, 80% of passengers at Zadar Airport arrive with low-cost airlines, which has helped the airport considerably over the years; only six years ago, the airport was threatened with the possibility of closure due to low usage. Benefits to the area are easy to imagine – and, in fact, a study was conducted last year that showed how 80,000 tourists arriving with Ryanair and Germanwings  earn the local economy €40 million.

Low-cost flights to Zadar Airport are due to start up again on 28th March 2011, though routes are yet to be confirmed. Lufthansa, however,  has stated that it will increase the number of flights it operates to the Dalmatian airport up to three flights per week.

Earlier this week, a number of Croatian newspaper covered the release of tourism statistics for Croatia for the month of September – and therefore also the stats for the first nine months of 2010 overall.

For September, Croatia received 1.1 million tourists, an increase of 3% over the same month last year. Meanwhile, these visitors stayed for a total of 6.6 million nights (6.2 million of which can be attributed to foreign visitors), an increase of 6% over 2009.

A number of regions received a healthy increase in overnight stays this September from last year, with Split-Dalmatia the most successful, achieving an increase of 20%. Zadar and Sibenik-Knin also fared quite well, with increases in 15% and 14% respectively. Dubrovnik-Neretva, perhaps unsurprisingly due to the popularity of Dubrovnik, also reached a healthy increase of 12% whilst it’s also rather pleasing to see that Zagreb – sometimes overlooked as a visitor destination in favour of the coast – achieved an increase of 13%. On the other hand, the region of Kvarner – home to resorts such as Opatija and Crikvenica, and the islands of Krk and Cres – didn’t fair anywhere near as well, with an overall decrease in overnight stays of 2% from 2009, whilst Istria and Lika-Senj, in which Plitvice Lakes are situated, reached the same levels as last September.

In terms of visitor arrivals, Split-Dalmatia received 16% more visitors this September and Zagreb 10% – whilst Sibenik-Knin (despite its healthy increase in overnight stay numbers) and Istria received 4% fewer visitors and Kvarner 3%.

Visitors from Russia were the most numerous this September – they accounted for 43% of arrivals and 41% of nights stayed – although there were also good numbers of visitors from American, Spain and Poland.

All of this means that overall for 2010, there have been 9.8 million tourists and 59 million overnight stays (53 million by foreign visitors) in Croatia, with tourism Damir Bajs saying that another 1 million tourists are expected by year end.

Yesterday’s edition of the Dalmatian newspaper Slobodna Dalmacija reported on statistics provided by the Zadar Tourist Board on the number of tourists in Zadar so far this year – and it’s a little bit of a mixed bag in comparison to 2009.

Overall, therefore, the number of guests visiting Zadar is just above last year’s level, though the town’s guests are staying for quite a bit longer.

Top nationalities visiting Zadar were Italians and Germans – despite recording an overall fall in their numbers by 33% and 4% respectively. In the ranking of visitor numbers after these two were guests from Spain, France, Austria, Slovakia, Hungary, and the UK, with a healthy increase in numbers from the first two and last country reported. An increase in guests from Russia, Belgium, Sweden, Switzerland, Ukraine, Australia and the US has also been noted.

Further to my post last week on tourism numbers in Croatia, and the tweets yesterday, many Croatian media sources have reported on the most up-to-date tourism numbers or the country for 2010 so far, which were presented at a meeting on tourism in Opatija this week. Over all, it’s good news – prompting Croatian Prime Minister Jadranka Kosor, who was present at the meeting, to declare this year the best tourist season ever.

All of the Adriatic counties have recorded increases in the number of overnight stays this year, between 4% and 12%. Dubrovnik-Neretva county has been the most successful, recording an increase of 12%. Most visitors were from Germany or Austria, whilst there was a healthy 30% increase in the number of Russian visitors – no doubt helped by the fact that Croatia suspended visa requirements for Russian citizens for the duration of the tourist season. There was, however, a rather severe drop of 13% in the number of Italian visitors.

Croatian Tourism Minister Damir Bajs also stated that every 50th tourist in Europe came to Croatia this year, whilst for the third year in a row, Croatia has been above the European average for tourism numbers. 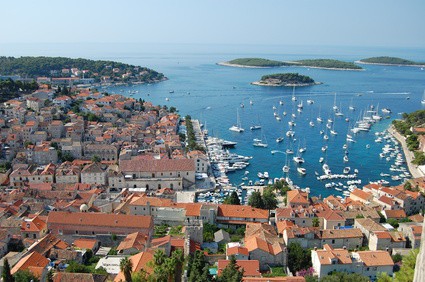 A recent report in Croatian daily newspaper Jutarnji unveiled some interesting statistics about the tourist season so far in Croatia. As often mentioned in the press, Croatia has had a successful July and August, with tourist growth in some regions in the double digits. Dalmatia and its towns and cities – such as Zadar, Split and Dubrovnik – had the best growth, particularly in August, but areas such as Istria and Kvarner which have struggled during the year, have also seen better results during August but far less than in Dalmatia.

Looking at various destinations, Hvar Tourist Board suggests that the island achieved a rise in visitors by 15% in July 2010 to the same month the previous year, whilst figures for August should be even better. Overall, the first seven months of the year saw a rise in visitor numbers by 16%; there was a vast increase in visitors from certain countries, including 34% more from Norway and 25% more from Spain.

Split, however, saw a 30% increase in the number of overnight stays during July, partially due to the fact that more and more people are choosing to stay in the city itself rather than just visit on a day trip. (The average length of stay has increased to 3.5 days.) The director of the tourist office there, Vedran Matosic, stated that there was an increased amount of visitors from England, the USA, France, Spain, Australia and New Zealand.

Dubrovnik, meanwhile, achieved 1.6 million overnight stays from the beginning of the year to 26th August, which is 12% greater than last year, whilst this statistic for the month of August could be between 10-15% higher than 2009. There’s an interesting increase in visitors from Spain (up 25%), Australia (35%) and Russia (30%), with 300% more visitors from Turkey and Greece – though, of course, visitors from these countries are still comparatively low in number.

The tourist association of Rovinj says that in terms of the number of overnight stays, their July is at the same level as 2009, whilst August was 2% better than the previous year – and for the year to 27th August, the number of overnight stays has also risen by 2%. So far, they’ve achieved 2.2 million stays, with 2.65 million expected by year end. The director of tourism in Rovinj, Odeta Sapac, believes the slower growth in Rovinj than in some Dalmatian resorts is a a result of the Istrian town having already nearly reached its capacity – and given the rise in popularity of the region even soon after the war, that may well be true.

Overall, Croatia has achieved 3% more visitors and 5% more overnight stays for the first seven months of 2010. By comparison, the Jutarnji article suggests that many European countries, such as Spain, Portugal, Cyprus and Greece – are expecting a drop in the number of the visitors for the first months of this year.