You are here: Home / Accommodation in Croatia / Lighthouses in Croatia

Given the country’s long coastline (and the assorted sea-faring vessels that travel up and down it), it probably doesn’t surprise you to learn that there are a number of lighthouses in Croatia. What does that, you might think, have to do with accommodation?

Well, rather unusually, there are a handful of Croatia’s lighthouses that you can actually stay in! They are perfect for those looking for something really rather different from the norm and who also want a peaceful, relaxing holiday. (By the nature of being a lighthouse, all are located in secluded, remote areas – they not exactly slap bang in the middle of a town or resort!)

Below you will find a list of lighthouses in Croatia in which you can rent apartments in, located in assorted spots up and along Croatia’s coastline. The majority of these lighthouses can only be rented for a week, unless otherwise specified. The majority, also, are still operated by a lighthouse keeper. 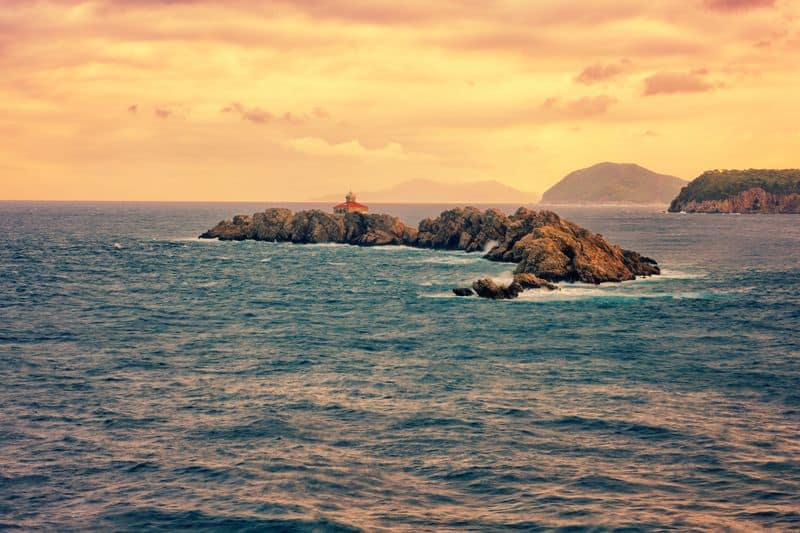 The lighthouse on Greben island, near Dubrovnik

For any that are concerned about access to these lighthouses, or obtaining supplies for a week’s stay do not worry – transfers can be organised and in almost all cases, provisions can also be supplied to you whilst you are there. If not, you may have to pick up supplies for the entirety of your stay before you reach the lighthouse – but that’s really no bad thing! Alternatively, you may also be able to have meals prepared by the lighthouse keeper.

Accommodation in lighthouses in Croatia

Sauvidrija near Umag, Istria
1 apartment, sleeps 2-4
Not only could you be experiencing the uniqueness of staying in a lighthouse, but how about staying in the oldest one in the Adriatic? Built in 1818, this lighthouse features a four bedroom apartment. Only 9km away from Umag, the lighthouse is also well placed for exploring other parts of Istria and is also close to Italy.

Sveti Ivan near Rovinj, Istria
2 apartments, sleep 2-4 people each
Situated on the very small island of Sveti Ivan, the shallow waters immediately surrounding the island make this lighthouse perfect for those with children, and it’s also a great location for those into diving.

Porer near Pula, Istria
2 apartments, sleep 2-4 people each
This 35m high lighthouse is situated on a very tiny island which takes only one minute to walk around. A good location for diving, although there can be some strong currents around Porer.

Veli Rat on the island of Dugi Otok, North Dalmatia
2 apartments, sleeps 2-4 or 2-3 people
Located on the southwestern part of the island of Dugi Otok, this is perhaps one of the more easily accessible lighthouses in Croatia that you can stay in. The island itself is connected by ferry to Zadar, whilst the lighthouse can be reached by car from the rest of the island. Not only is it easy to reach (meaning you can pick up additional supplies as and when you need them) you can also explore the rest of the island and also make trips back to the mainland. Set in beautiful pine tree surroundings, the nearby pebble beaches mean this one’s also good for families. Available to rent by the weekend during summer.

Prisnjak, near island of Murter, North Dalmatia
1 apartment, sleeps 2-4 people
Prisnjak is a small island just west of Murter (which is located close to the Croatian mainland), and is a great place for those wanting to explore the wonderful Kornati National Park. Also a great location for those keen on fishing; the shallow waters around the island mean the sea can be warmer here than in other parts of the country, meaning a longer swimming season. The island will not be entirely private, as day-trippers from Murter can visit. No lighthouse keeper. Available to rent by the weekend during summer.

Susac, mid Dalmatia
2 apartments, sleep 2-4 people each
Built in 1878, the lighthouse on Susac sits high on the south side of the island providing for some truly stunning views. Susac has no inhabitants – bar the lighthouse keeper and an occasional shepherd – so it’s perfect for a tranquil holiday. A great place for walks and hikes, followed by dips in the sea. You can organise to have some meals prepared by the lighthouse keepers – a great way of trying some local, authentic meals. This lighthouse is not suitable for those with children due to the rocky nature of the island.

Plocica, near island of Korcula, south Dalmatia
2 apartments, sleeps 6-8 or 8 people
As you’ll notice, this lighthouse can sleep up to eight people in each apartment, meaning it’s great for larger groups, including those with children. A great choice for keen divers. Plocica is situated between the islands of Korcula and Hvar. No lighthouse keeper. Available to rent by the weekend during summer.

Palagruza, near island of Korcula, south Dalmatia
2 apartments, sleeps 2-4 people each
A unique setting – the lighthouse itself is situated high up slap bang in the middle of this small island (for access reason, it is therefore not suitable for those with health problems), whilst the island itself is located almost directly halfway between Italy and Croatia in the Adriatic Sea. Provides for some stunning views!

Lighthouse Villa Korkya, near island of Korcula, south Dalmatia
Villa sleeping 8 people
Located on the island of Vela Sestrica (in between Korcula and the Peljesac Peninsula), this pretty lighthouse comes with its own pool and has a private beach area. Inside, it’s furnished in a modern style.

Lighthouse Grebeni, near Dubrovnik, south Dalmatia
Villa sleeping 8 people
Located on the tiny island of Greben near Dubrovnik, this is a spacious lighthouse option that also offers its own pool and private beach. Pets are also allowed!