You are here: Home / About Croatia / Famous Croats / Croatian Sports Teams and People

Aside from being a popular tourist destination, one of the main ways that many people know of Croatia is because of the country’s famous sportsmen and women. For such a small country, a remarkable number of top-class athletes have emerged. Whether you’re a fan of football, tennis, skiing or are an avid follower of the Olympics, you’re bound to have seen some Croatian sports stars participating…and winning!

Croatia’s most famous skiier is Janica Kostelic. This outstanding skier won a number of World Cup titles, and gold and silver medals at the 2002 and 2006 Winter Olympics – rather amazing when you consider that Croatia doesn’t really have substantial ski training facilities or opportunities.

Janica retired from competitive skiing in 2007, after suffering from persistent injuries.

Janica’s older brother Ivica is also a professional skier and certainly no less talented! Ivica won one silver medal in the 2006 Winter Olympics, two in the 2010 Winter Olympics (in the slalom and combined events) and one in the 2014 Winter Olympics (combined), as well as a World Championship gold medal in 2003 in the slalom. Ivica’s best achievement was winning the overall FIS Alpine Ski World Cup in 2011, winning a total of 7 World Cup races during the year.

Read more about the Kostelic siblings on their official websites: Janica Kostelic and Ivica Kostelic.

One of Croatia’s most well-known current athletes is high-jumper Blanka Vlasic, who hails from Split. Very successful in her field, Blanka has won a number of medals, including golds at the World Athletics Final, World Indoor Championships and World Championships, and a silver medal at the 2008 Olympic Games in Beijing. She sadly missed the 2012 Olympic Games in London due to injury, although was surely one of the favourites for her event.

She set her personal best of 2.08 metres in August 2009, the second highest jump height ever achieved in the sport. She was named the IAAF World Athlete of the Year in 2010.

Blanka barely competed in 2016, but did make it to the Rio Olympics were she won the bronze medal in the high jump competition.

See the website of Blanka Vlasic for more information about her, and the Croatian Athletics Federation website for details about Croatian athletics.

Sandra Perkovic is another well known track and field athlete, competing in the discus event. Sandra’s personal best throw is 69.11 metres, which was then also a Croatian record – and the gold-medal winning throw at the 2012 Olympic Games! Sandra successfully defended her title by also winning gold at the 2016 Olympic Games, with a throw of 69.21m.

A number of Croatian basketball players are relatively famous (if you like your basketball!), having played for some top teams in Europe and the U.S. over the years. These players include ’90s greats such as Toni Kukoc (who played for the Chicago Bulls), Dino Radja (Boston Celtics) and Drazen Petrovic (NJ Nets), who sadly died in a car accident in 1993 at the age of only 28.

Croatia won a silver medal for basketball in their first Olympic Games in 1992 (losing to the mighty U.S. team in the final), a remarkable and uplifting achievement for a country suffering from the terrible effects of war at the time.

As in much of Eastern Europe, handball is a popular sport in Croatia. There are handball leagues in the country which attract a large following and which have good attendance figures.

Croatia has won gold in men’s handball in both the 1996 and 2004 Olympic Games. They also won the gold in the 2003 World Championships, and have been runners-up three times – including at the 2009 Championships, which were held in Croatia.

More info on the sport at the Croatian Handball Federation website. 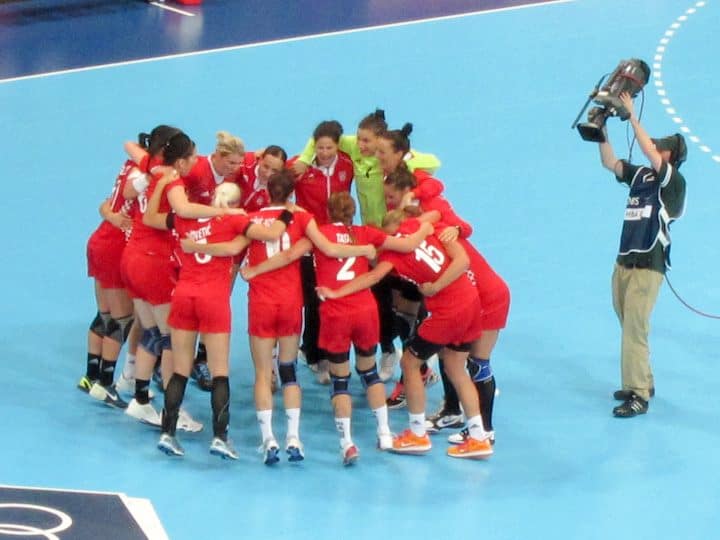