You are here: Home1 / About Croatia2 / Famous Croats3 / Croatian Football

Here’s a brief guide to Croatian football, including details on the domestic football leagues and the progress of the national football team since the country obtained independence in 1991. 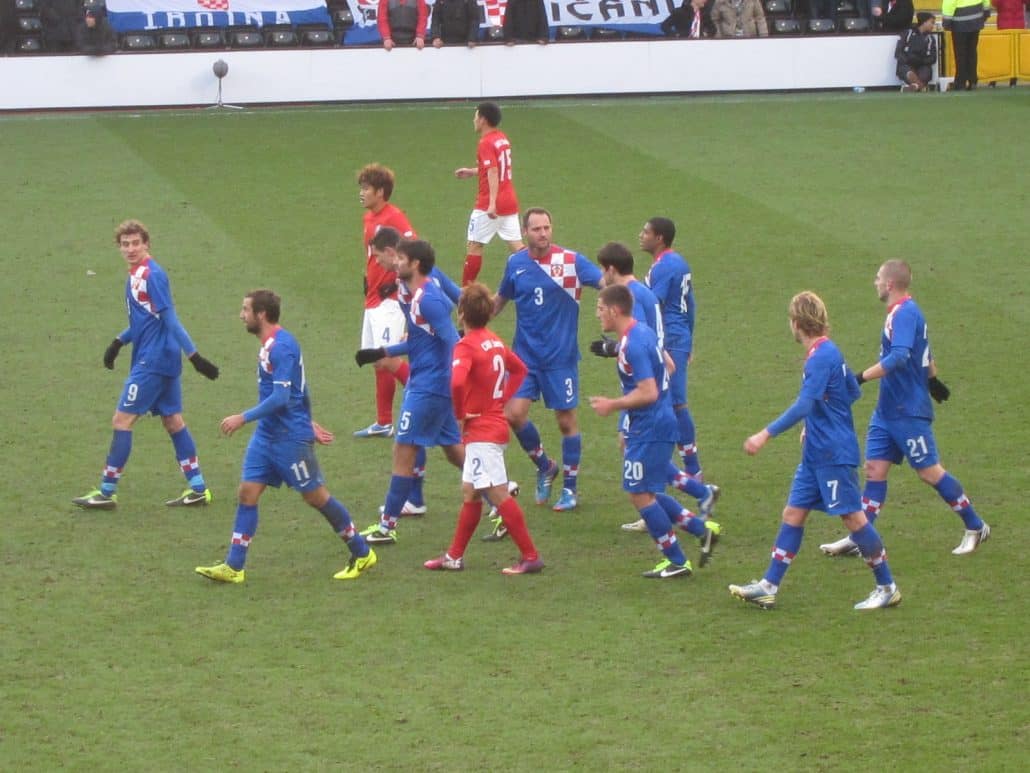 Croatian football has made a considerable splash on the international football field (excuse the pun) since the country gained independence in 1991. Around that time, the team contained many fantastic players, some of whom had helped Yugoslavia win the FIFA Youth World Championship in 1987. (They beat Germany 5-4 on penalties after a 1-1 result in full and extra time.) The Croatian stars of the youth team included Zvonimir Boban (who was captain), striker Davor Suker, Robert Jarni, Robert Prosinecki and Igor Stimac.

Having been unable to participate in qualifying for Euro ’92 and World Cup ’94, the first major football competition that Croatia competed in was the Euro ’96 Championships, which were held in England. Croatia reached the quarter-finals of the tournament, where they lost 2-1 to Germany, who went on to win the competition. In the group stages of the tournament, Croatia beat reigning champions Denmark 3-0 in a thrilling victory.

Croatia had even more success at the next tournament, the 1998 World Cup held in France. After progressing through the group stages and beating Romania 1-0 in the second round, the team produced the upset of the tournament by beating Germany 3-0 in the quarter-finals in a masterful display. In the semi-finals, they met host nation – and eventual winners – France, to whom they lost 2-1. The game included a controversial moment when defender Slaven Bilic fell dramatically after slight contact by French player Laurent Blanc, which saw Blanc get a red card and meant that he missed the final – which France, of course, won. Croatia went on to win third place in the tournament, beating Holland 2-1 in the third place play-off. Davor Suker also won the Golden Boot at the tournament, with six goals.

Mixed results in the early 2000s

In the 2006 World Cup, Croatia once again failed to go beyond the group stage, in an uninspiring campaign which included a loss to Brazil, and draws against Japan and Australia. The game against Australia was reasonably bad-tempered – three players were sent off and, rather famously, Croatian player Josip Simunic received three yellow cards from English referee Graham Poll. (A useful bit of trivia to know for pub quizzes!)

At Euro 2008, Croatia started in rather stunning form. Wins in all three group games – against Austria, Germany and Poland – saw them receive maximum points and top their group. The quarter-final match against Turkey was a rather boring affair – 0-0 after full time forced the game into extra time. Croatia thought they had won it by scoring in the 119th minute i.e. the last minute of the game). Turkey however managed to equalise in injury time – their goal is officially timed at 120 + 2 minutes). The game went on to penalties, which Croatia lost 1-3.

Croatia failed to qualify for the 2010 World Cup, finishing third in their group behind England and Ukraine.

They qualified for Euro 2012 (via the play-offs) and found themselves in the same group as the Republic of Ireland, Italy and Spain. After a strong start in their first game against Ireland (they won 3-1), they drew their second match against Italy 1-1 and then lost (late on) 1-0 in their group game against eventual winners Spain. This meant they failed to progress from their group which was a shame; their attractive style of play surely meant they should have gone further in the tournament. The game against Spain was coach Slaven Bilic’s final game after six years in charge. He was succeeded by another Croatian national team great from the 1990s – Igor Stimac.

Igor Stimac unfortunately lasted just over a year in charge of the national team, resigning (i.e. before he could be sacked) the day after a second 1-0 loss of the year to Scotland in the World Cup qualifiers. They ended up finishing second in their qualifying group. Under-21 coach Niko Kovac was appointed coach of the senior team, and led Croatia into the World Cup play-off matches against Iceland which they won 2-0 on aggregate, seeing them through to World Cup 2014.

Unfortunately, Croatia didn’t exactly have a spectacular World Cup. Despite winning 4-0 against Cameroon in their second game, with losses against Brazil and Mexico they went home after only the group stage. They did have the honour of ‘opening’ the World Cup, however, with their first game against Brazil!

Croatia had a mixed qualifying campaign for Euro 2016, finishing runners-up to Italy in their group. During the campaign, Niko Kovac was sacked as manager and replaced by Ante Cacic. They also had a mixed tournament – beating Turkey 1-0 with a fabulous Luka Modric goal; drawing 2-2 against the Czech Republic in a game marred by some crowd trouble; and then stunning then holders Spain 2-1. They then lost 0-1 (in extra time) to eventual champions Portugal in a very dull game.

Croatia’s qualification run for the 2018 World Cup was mixed – despite starting pretty strongly in their group, a run of poor results left them with the possibility of missing out on the World Cup. Manager Ante Cacic was sacked and replaced by Zlatko Dalic prior to the last qualification game – which Croatia did win (beating Ukraine 2-0 in Kiev), seeing them finish second in their group to Iceland. (!)  Croatia had to win in the play-offs to reach the World Cup – which they did comfortably, beating Greece 4-1 on aggregate.

Croatia were drawn in the same group as Iceland, Nigeria and Argentina for the World Cup. Tough, but do-able…right? Who knew how it would pan out!

Croatia ended up winning all three of their group games, including an absolutely stunning 3-0 victory against Argentina. (Their other results were a 2-0 win against Nigeria, and a 2-1 win against Iceland.)

Topping their group, they proceeded into the second round to play Denmark. After a remarkable start to the game – with both teams netting a goal within the first 4 minutes of play! – the match went into extra time and then penalties. If you’re an English football fan, you know the heart break of penalty shoot outs – something Croatian fans also share, as the team has always performed badly in them. Thankfully, Croatia won 3-2 on penalties, thanks to some amazing work by goalkeeper Danijel Subasic. (And to Luka Modric – who scored in the shoot out despite having a penalty saved in extra time in the match itself.)

On to the quarter finals to play hosts Russia. Croatia went behind but equalised quickly with a goal from Andrej Kramaric. Again the match went onto extra time, and with a goal from Domagoj Vida, Croatia looked to be heading into semis. Russia equalised five minutes from the end, however, forcing Croatia on to another penalty shoot out! This time some poor shots from the Russian squad saw Croatia win the shoot out 4-3 and progress to a semi-final match…against…England!

England themselves were also having a great World Cup, progressing further than they’d done for 28 years. (Even winning a penalty shoot out as well!) We here at Visit Croatia had very mixed feelings about the match – seeing as we’re both English and Croatian – but on the positive side, it did mean one of our teams would end up in the World Cup Final!

A poor start to the match saw Croatia go behind to an England free kick in only the fifth minute of play. However, Croatia were by far the better team (certainly from the second half on) and an Ivan Perisic goal in the 68th minute, and then a Mario Mandzukic winner in extra time saw England going home, instead of football. (Sorry.)

The actual final against France was probably one of the best World Cup finals in living memory, and even though we’re biased (!), Croatia were the better team. A terrible start saw the the team go behind due to an Mario Mandzukic own goal in the 18th minute, following a free kick that shouldn’t have been. Ivan Perisic scored a brilliant equaliser, only for France to be awarded a penalty (should it have been? Shouldn’t it?). In the second half Croatia again had more of the ball and more chances…but a few flashes of brilliance from Pogba and Mbappe saw France score twice more. (A calamitous error from French goalkeeper Lloris gifted Mandzukic a goal in the right end.) 4-2 was the final score to France.

It wasn’t the result any Croat wanted, but to finish runners up of the World Cup is an truly amazing achievement for the players and for a country of just over 4 million people. Certainly, everyone can be very, very proud of the team!

Luka Modric, the midfield genius, was awarded the Golden Ball prize (the best player of the tournament) for the 2018 World Cup. Luka went on to win the prestigious Ballon D’or and The Best FIFA Men’s Player awards at the end of 2018. All greatly deserved, he is the first Croat to win these honours.

Football is a very popular sport in Croatia and the country’s domestic league is the HNL (hrvatska nogometna liga – Croatian football league). There are three divisions in the HNL.

The top division is the Prva Liga (first league), which currently contains 10 teams. The most famous Croatian clubs are Hajduk Split and Dinamo Zagreb, and there has long been a fierce rivalry between the two. These two teams are also the most successful; between the two of them they have won the league each year, bar once, since the league’s inception in 1992!

Some of the other well-known teams in the country are NK Osijek, Cibalia from Vinkovci, NK Rijeka and NK Zagreb. (In case you’re wondering – ‘NK’ stands for ‘nogometni klub’, which does indeed mean ‘football club’.)