Rab island covers an area of 90.48 square km, is one of the greenest islands in the Adriatic and probably one of the most magical as well. It is covered with pine forests and has a number of beautiful sandy beaches, and is well known for its mild climate that differs from the mainland. The reason for this particular climate is because three ridges are present which protect the island from cold winds that descend from the Velebit mountains. 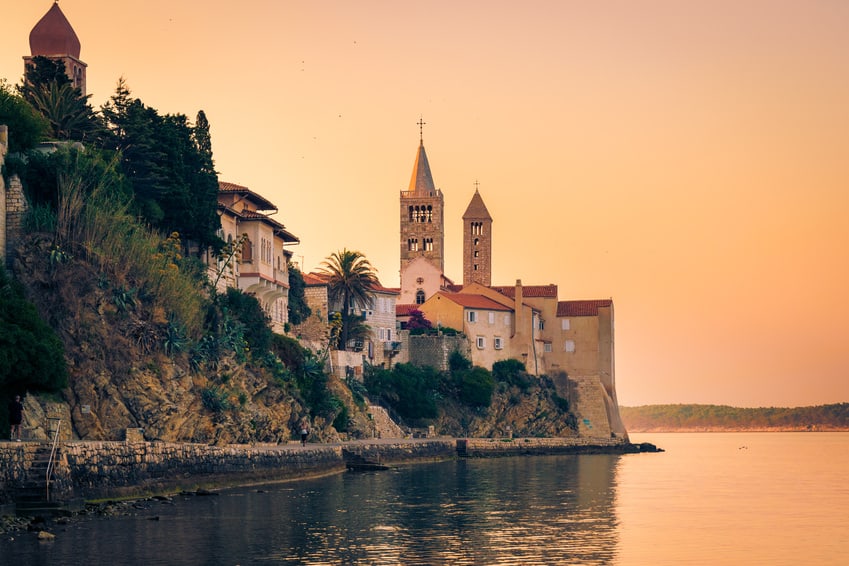 One of Rab’s main claims to fame that it is the birthplace of a stone cutter called Marin. He settled in Italy (in the 4th century) and founded the state of San Marino.

More on the following pages:

The main resort on the island, Rab Town, is where most of the island’s sights are located – and as it’s a place full of medieval buildings (many from the 13th century), that’s no surprise. The old town walls are still visible in some places; the central street (Srednja ulica) running through Rab Town contains some well-preserved 15th century buildings, leading up to the Town Loggia that was built in 1509.

The 26-metre high Bell Tower in town an be climbed for great views over the sea.

There are also numerous churches in Rab Town, including St Mary’s Church from the 11th century, which was in fact built on the site of a previous church, of which some materials were used in the construction of this one. The Church of St John is amongst the oldest – perhaps from the 6th or 7th centuries, whilst the Church of St Andrew has the oldest bell tower on the island – it was built in 1181.

Kalifront Forest, outside of Rab Town, is the largest forest on the island and has protected status.

The Franciscan Monastery of St Euphemia is located around 6km outside of Rab Town. Built in 1458, it contains a number of gloriously painted works, and its ceiling contains 27 scenes depicting St Francis of Assisi.

Rab is home to some fine beaches, including a collection of sandy beaches around the town of Lopar. Probably the most famous of these is Paradise Beach, which is popular not just for its sand but also because of the extended shallow nature of the sea there, meaning it’s ideal for families with small children.

Rab is also popular for naturist tourism, and there are number of naturist beaches on the island. One of the most well known is Sahara Beach.

There are a number of hotels on the island, the majority of which are in Rab Town, although a couple also exist in Lopar. Private accommodation is also available. See our Accommodation on Rab section.