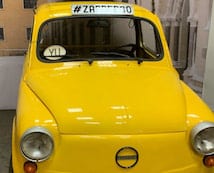 If you’re anything like Visit Croatia, you have both a strong connection to the city of Zagreb…and are absolutely in love with the decade that is the 1980s. In which case, what could be a better museum for you to visit practically anywhere in the world than the Zagreb 80s Museum!

Well, even if neither of the above apply to you, read on…for this is certainly one of the most fun museums to visit in Zagreb!

If truth be told, this was definitely on my list of things to see in Croatia’s capital…but I actually stumbled across it during a walk in the Upper Town one November afternoon, having finally escaped the confines of the warm indoors after a lengthy and heavy rainstorm. Admiring the statue of St George as I have done a number of times before, I turned around…to be greeted by a bright and cheery sign with everything (well, not exactly everything) that is dear to me.

Climbing up the steps to what is basically a first floor apartment, you enter the museum’s small lobby area in what would ordinarily be a hallway. But this is a hallway with a difference, for it features half a yellow Fico car (a Zastava 750) practically emerging out of one wall. And you can climb inside for photos!

There are several distinct rooms – apart from the hallway/museum lobby, there’s an open plan living room/kitchen with sofas, entertainment and lifestyle items (telephone, record player, TV) and even one of those giant wardrobe/sideboard items that seemed to be very popular in…well…everyone’s home in Yugoslavia in the 1980s. Beyond that there’s another hallway-slash-office-slash-tribute-to-Zagi (remember him??!); a bedroom and then a kind of games room with the ubiquitous 80s games consoles.

But what’s there to do?

The premise of this museum is that it is fully interactive and offers you an immersive experience of what living in Yugoslavia in the 1980s was like. That means nothing is off limits – you can touch everything in the museum, sit in the chairs, open up the drawers, play around with things like the games consoles. You can even dress up in 80s gear as one of the wardrobes is filled with 80s clothes!

There’s plenty of fun to be had touching and feeling the exhibits, opening up cupboards to see what’s inside. Try sitting in the living room and pretending this is your apartment, albeit one 35 years ago.

One area that brought me the most amusement was the small corner dedicated to Zagi, the blue squirrel that was the mascot of the 1987 Univerzijada (the University Olympics) which were held in Zagreb. If you were slightly obsessed by him back in that decade, well, this will be a real treat for you.

We (of course!) absolutely loved this museum and really enjoyed our visit – so it’s no surprise that we’d really recommend this place.

However, we would say that the Zagreb 80s Museum is probably for those that are either really in to the 1980s (or don’t mind it for a few hours!) and/or have some kind of nostalgia about Yugoslavia or another Eastern European country during that decade. (Whether you lived through that time, had family there or visited in some way.)

But it is actually even good for kids! Given that it’s a fully interactive museum, they’ll also have fun looking at the ‘funny’ exhibits and there’s plenty of kid-friendly things that will catch their interest. (Even if this sets the scene of a time ages before they were born.) And they’ll just love sitting in the yellow car and pretending to drive.

The Zagreb 80s Museum is also located just a short distance from many other sights in the Upper Town, so can easily be combined with a tour of this part of the city – it’s a nice way to change up the scene from walking around looking at many of the outdoor sights.

There are also some rather fun (and some…ahem…quite naughty) trinkets to take home from the little shop. I went home with a Tesla (a Yugoslavian brand) lightbulb!

Full details on Zagreb 80s Museum can be found on the official website. 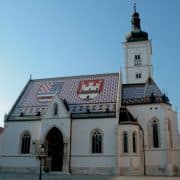 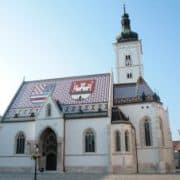